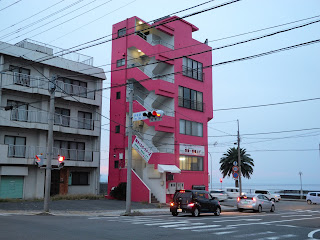 Not quite sure if the above building is actually a hotel. It is located next to the ocean in the city of Ito and that bright colour of crimson was such that I just had to grab a shot.


So when I found this song by Sachiko Nishida（西田佐知子）, "Kurenai Hotel" (Crimson Hotel), I was automatically reminded of that photograph from my trip to Japan. The song itself was Nishida's 86th single from April 1969, and it's an intriguing ballad which seems to weave a bit into Folk through that harmonica and then what would have been considered Shibuya-kei if it had been created 20 years later because of those plucky violins. This was one of Kyohei Tsutsumi's（筒美京平）early creations and I guess the song kinda showed that he was quite interested in pushing his abilities in different directions. Jun Hashimoto（橋本淳）provided the lyrics about this mysterious hotel shrouded in fog which has been the source of many a sad end to romance. I guess the titular place was truly a place just to sleep or cry.

At the same time, there was something to Nishida's delivery of "Kurenai Hotel" that had me thinking along the lines of that mix of Folk and even enka. The song didn't become a hit, only peaking at No. 81 on Oricon. However, according to J-Wiki, it has been covered by artists such as The Peanuts and Chiyo Okamura（奥村チヨ）, and songwriters Tatsuro Yamashita（山下達郎）, Haruomi Hosono（細野晴臣）and Ryuichi Sakamoto（坂本龍一）have praised it as one of their favourite Tsutsumi compositions.


Plus, I did find a number of videos showing folks doing their own karaoke version of "Kurenai Hotel" as above. Also, there is even a true Kurenai Hotel located near Kumamoto Station.
Posted by J-Canuck at 4:06 PM