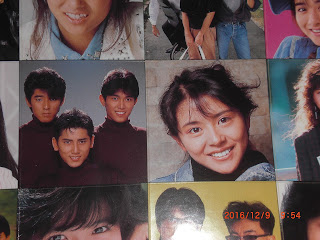 Hope everyone got through their weekend OK especially with the all of the craziness that's been going on in Canada and the United States over the past couple of days. And that includes the massacre in Quebec City. I can only give my condolences to those who were slain and their families. I've tried not to let too much of the horrors of the outside world seep into this particular nook over the past 5 years but this time I felt that I had to at least acknowledge what has happened.


To go on then to somewhat happier things, I discovered 70s aidoru Mako Ishino's（石野真子）debut single from March 1978, "Ohkami nanka Kowakunai" (I'm Not Afraid of Anything Like A Wolf). It's an adorable piece for Ishino that was written by the legendary Yu Aku（阿久悠）and composed by folk singer Takuro Yoshida（吉田拓郎）with the arrangement done by Shigeru Suzuki（鈴木茂）.

I guess the theme for this song would be one of redemption. The wolf that Mako-chan is referring to is a fellow who seems to have a reputation of being rather ravenous for the women but one lady can apparently see right through him and down to the decent guy he really is. As for whether love is putting blinders on the lass, I will have to let you decide on that one.


"Ohkami nanka Kowakunai" may have been released in 1978 but there's something about that says that it could have been something that a teenage Hiromi Iwasaki（岩崎宏美）could have done back in her debut year of 1975. That bright and bouncy voice of Ishino also reminded me of the vocals of young Miss Iwasaki back then. And it was a nice touch on whoever choreographed Ishino's performance with the shadow puppet version of a wolf.

As a debut single, it didn't do too badly, getting as high as No. 17 on the Oricon charts. However, she would get her most successful song nearly a couple of years later with "Haru La!La!La!"（春ラ!ラ!ラ!）
Posted by J-Canuck at 9:44 PM