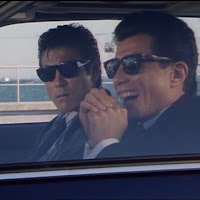 This article isn't on Hiroshi Tachi, but I thought this snapshot of him from an "Abunai Deka" episode I found on Twitter thoroughly represents how I felt as I watched the "Uta Kon" tribute to the Minyo superstar from Hakodate, Michiya Mihashi (三橋美智也). "Uta Kon" is definitely taking a step in the right direction with their weekly tributes to singers/songwriters from bygone days. Now if they could just do that for the rest of the Yon'nin Shu and the likes of Yujiro Ishihara, that'd be great.


Besides a brief history of him, a good number of Michi's hits were highlighted via the night's guests and the VTR clips. I felt glad that I knew and I liked almost all of what was being mentioned save for one or two. There were my old and perennial favourites like "Hoshikuzu no Machi" (星屑の町) and "Kojou" (古城), and the newly acquired "Ringo no Mura kara" (リンゴ村から) and "Akai Yuhi no Furusato" (赤い夕陽の故郷). However, I was sort of hoping to hear this tune that's both a favourite and relatively new to my Michi playlist, "Iwate no Osho-san". It would definitely have spiced things up, especially since the tribute focused more on his serious and/or melancholic tracks.

With the musical styling by Kenji Yoshidaya (吉田矢健治) , "Iwate no Osho-san" feels like fusion of East and West. The former would be from the screaming trumpets and droning horns that provide an Oriental vibe that befits a song that revolves around a monk; the latter comes from the catchy, upbeat percussions which have a Latin touch. Ryo Yano's (矢野亮) lyrics then has Mihashi singing about what I think are monks from the said prefecture coming down from the frigid mountains to the main village to celebrate some festival. From how Yoshidaya's score changes from quiet to raucous within the first few seconds of the song, the abbots must've been meditating or going about their peaceful lives before they realise it's time head down the mountain to "PARTY HARRDD!!!"... Well, maybe not too hard.

"Iwate no Osho-san" was released in 1958 and was also one of Mihashi's many successes. Looking at the J-Wiki, it wasn't one of his top 18 enka-yo hits, so perhaps that was why it wasn't featured on "Uta Kon" - or at least there wasn't time to include it.

One thing I've realised about the tributes to Michi I've watched (mostly online, until now) is that they don't talk about his disco phase. I thought that there would be minimally some mention of it since that was quite a transition he made in the 70's, but I guess not. I wonder if it wasn't that memorable, or many only want to remember the veteran by his enka and minyo, and disco which may have been seen as an act of folly. Too bad, "Disco Tengoku" (ディスコ天国) on the NHK stage would've been incredible.

Here's Kouhei Fukuda's (福田こうへい) rendition of "Iwate no Osho-san" to round things up. It was from this great "Special Stage" on a "Shin Nippon no Uta" episode where I discovered this song - there were tributes to a whole barrage of showa era enka/ryukoka singers.