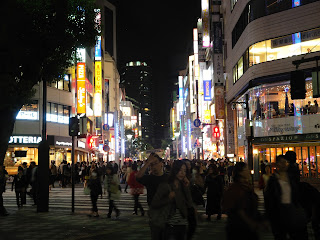 Got hit with a good bunch of articles to translate earlier today so I'm feeling a tad frazzled right now. Luckily, dinner helped take the edge off. Plus, I'm feeling that whimsy tonight so I've decided to go for something silly and provide a follow-up to my article on those five karaoke tunes that were always a part of my singing arsenal whether I went with teachers and students to the nearby Karaoke Kan or a tiny karaoke bar.

This follow-up actually involves those five karaoke tunes that I tried that not only not become part of the arsenal but had me vow never to try them again. For that other article, I mentioned three conditions for me to have a chance of singing a song without clearing the room, and for the sake of this article, I will mention them again:

A: A nice even melody without any shifts in key.
B: Lyrics that didn't require me to leaf through a kanji dictionary many times.
C: No demand for vocal gymnastics (therefore, Kazumasa Oda and Dreams Come True were out).

Now, of course, there were plenty of other tunes that I did try out and never resumed but these five's failures left residual and painful memories of shame that have popped up now and then like unwanted cold sores.

Let me begin in no particular order.

Well, obviously I broke Rule No. 3. But actually I made the rule because of what had happened with this song. I absolutely love Oda's magnum opus....personally I think "Love Story wa Totsuzen ni" had a lot of the non-fans or casual fans of Off-Course forget that he had ever been a member of that amazing band.

I sang...or tried to sing..."Love Story wa Totsuzen ni" at karaoke when I was visiting my relatives in Osaka not too long after "Tokyo Love Story" had finished its run on Fuji-TV. Ugh! That refrain especially twisted me in conniptions...I hadn't realized that that part of the song undulated and twisted in 3D. Practice might have improved things somewhat but I was rather mortified at the time and my relatives were politely encouraging which made things worse. Ironically enough, I haven't seen them again in over 25 years.

Another case of breaking Rule No. 3. Nakanishi has an amazing soaring voice. I do not. I can only guess the multiple glasses of Brown Cow did all the talking one night for me at the karaoke box. In any case, I did my rendition of this wonderful nighttime ballad which was rendered not so wonderful since my voice didn't get anywhere near as high as the original singer's vocals when needed.

Let's say this. Nakanishi = soaring jet. J-Canuck = Monarch butterfly with a case of hiccups. Once again, I received a sympathetic smile from a friend of mine which fairly screamed "Nice try, bro!". After that, I let the professionals handle this one.

Indeed, this is a joyful song. I loved the way YUKI contracted some of her lyrics as if a foreigner were trying to say them, and "Joy" in general sounded quirky and inspirational at the same time. And that was some music video.

One night, while I was teaching at the local juku in Urayasu City right next to my own city of Ichikawa, I made the suggestion to those night students of mine about having a karaoke outing at the nearby Shidax (which was the high-end karaoke box). Of course, they all leaped at the opportunity but I made one condition: the first hour would have my charges sing only English-language tunes. They were initially wary but, hey, they did a great job on that night.

The second hour was back to the regular stuff, and that was when I was interested in giving "Joy" a shot. It didn't clear the room but things were silent for a few awkward moments. Finally, the senior student basically remarked "Well, that was interesting...". Damning with faint praise indeed. YUKI with her high-pitched voice was fine with this, but the song didn't work quite as well with a baritone like me.

One of the saddest ballads ever released by the Hokkaido band, Koji Tamaki probably had his fans in tears with his powerful and heartrending delivery. I had listeners crying for a different reason. Strangely enough, I was OK with some of the other hits by Anzen Chitai, and in fact, one of my go-to tunes is another one of the band's ballads but I think with "Friend", there was just some subtlety required that I couldn't emulate.

I didn't usually sing anison at karaoke but I did make an exception for the mighty theme song from "Uchuu Senkan Yamato" since the vocals were well within my range. However, whenever I tried B.B. Queens' biggest hit, "Odoru Ponpokorin", it wasn't just a little too high but it was a little too far out of my silliness range. For a number of songs, a good amount of body movement is encouraged but I was never all that expressive a fellow. Therefore, what my friends saw was more "Suwaru Ponpokorin" than "Odoru Ponpokorin".

So if any of you folks have your own karaoke stories, good or bad, please let me know.
Posted by J-Canuck at 10:08 PM