In my article on Harumi Miyako (都はるみ) a week ago, I mentioned that there was a single by the Taiga drama star I found on a "Nippon no Uta" binge. That single is "Yatate no Sugi".


Coming from another Special Stage that paired Sugi with enka singer George Yamamoto (山本讓二), "Yatate no Sugi" was sung during the time when both singers showcased their new tunes for that year/around that year. Yamamoto first put out a rather bluesy Mood Kayo that was quite easy on the ears - it feels like you're in a smokey bar with a glass of the hard stuff in hand after a hard day of work, listening to "Naitara Ii sa" as you wait for the rain outside to ease before leaving. Then when it was Sugi's turn, those delicate strings and soft trumpets of "Yatate no Sugi" make it feel like you just left said bar and got transported to some nature trail in the middle of a forest where the air is crisp and you can see the clear sky between the branches of the cedar trees. In other words, it was very refreshing to hear this song after much "hardcore" and aged enka earlier in the show.

The focus of "Yatate no Sugi" is the sacred cedar of the same name in Yamanashi prefecture. This huge tree stood east of the peak of the Sasago ridge for more than a millennium and it's still going strong today along a hiking trail. I'm not entirely sure why it is worshiped, but back around the Edo era, samurai would pray to the Yatate Cedar before a war in the hopes that they will emerge victorious; an arrow, which in Japanese is "Ya" (矢), would be shot at the tree afterwards - that's how the tree got its name. I got this information from the Otsuki City tourism website which you can check out here.


"Yatate no Sugi" was released on 21st May 2008. Writing it was Sugi himself under the pen name, Ryo Daichi (大地良), and he seems to be talking about the strength and comfort it still gives the people of Yamanashi (or minimally Kuronoda Village which is in the tree's vicinity) even after all those years. It's a nice and noble tribute to one of Yamanashi's natural wonders. There's even a plaque to commemorate this song and a speaker playing it near the tree. Yup, this is definitely the flavour of the month, besides Miyako's "Sen'nen no Koto". Come to think of it, I like both songs because they give me a similar vibe - airy and dignified - just that Sugi's has a slightly more enka feel that Miyako's. 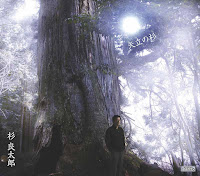 teichiku.co.jp/teichiku/artist/sugiryo/discography/TECA-12140
﻿
Posted by Noelle Tham at 8:54 AM