This ballad by Ryo Aska（飛鳥涼）rang a bell with me when I heard it on YouTube and it turns out that it is on my purchase of his June 1991 album "Scene II". It was also the coupling song for his mammoth hit single "Hajimari wa Itsumo Ame"（はじまりはいつも雨）which had been released earlier in March that year.

Written and composed by the singer-songwriter, "Kimi ga Ai wo Katare" (Express Your Love) starts off with some pretty piano to relate the story of some fellow who finally got the message that he was loved despite his own doubts about the relationship. I think the diagnosis here was that although he had been hearing, he really hadn't been listening. Well, it looks like that has been resolved happily and he has given standing orders to his significant other to let him know that specific reassurance whenever he falters.

Of course, being an Aska ballad, there will always be that sense of epicness (forgive me, I realize that it isn't a real word) infused in the arrangement, and sure enough, the second half sounds like the clouds parting to let the rays of sunshiny wisdom and joy filter into the guy's brain. I would say that there is even some passing resemblance to The Beatles' "Hey Jude" near the end. Break out the swaying glow sticks!


Gotta include the concert performance of "Kimi ga Ai wo Katare" with an orchestra although I think the original recorded version still takes the gold medal in terms of glory.


Now the whole reason that I've put this ballad up in the first place was that I was actually looking for any Saburo Tokito（時任三郎）songs featured online. Up to this point, I was able to profile a couple of songs by the actor/singer, his bluesy and romantic "Kawa no Nagare wo Daite Nemuritai"（川の流れを抱いて眠りたい）from 1981 and his comic hit, "Yuuki no Shirushi"（勇気のしるし）which was the jingle for all those Regain power drink commercials a decade later. And those songs were profiled way back in 2012.

Unfortunately, Tokito will probably only be known for his skills as a kakkoii thespian since I really wasn't able to find anything except videos representing the above two songs. However, I found out that he covered Aska's "Kimi ga Ai wo Katare" in June 1992 as his 16th single for which the above video is a cover.

Going back to Aska, I know about his personal problems from last year and I hope he gets better. 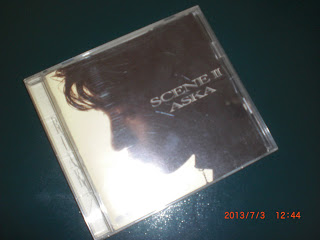