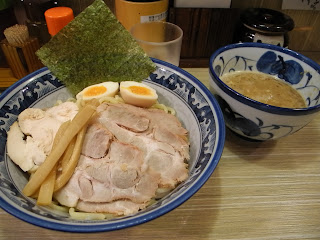 Actually the above is a photo of tsukemen but since I've considered the scrumptious dish as a form of deconstructed ramen, it will serve for my purposes here.


Whenever I took my rare trips outside of Tokyo, one of my favourite destinations was Yokohama and within that wonderful port city, one of my favourite stops was the Shin-Yokohama Ramen Museum. Although I enjoyed visiting and staying right by Yokohama Bay with Minato Mirai 21, Yamashita Park and Chinatown in the vicinity, the Ramen Museum was (and is) located a little further away near JR Shin-Yokohama Station, but all it takes is a short subway ride up to get there from the Bay so not inconvenient at all.

Perhaps the place might be seen as a little too touristy but I enjoyed going there not only to have my choice of ramen represented by several restaurants from all over the nation but also to savor the time trip back to Tokyo of the 1950s. The restaurants are all located down in the sub-basements of he facility surrounded by a detailed mockup of postwar inner city Tokyo so the place can also be a feast for the eyes as well as the stomach.


Now the reason I gave that shout-out to one of the national emporia for Japanese dishes is due to the music video for Hitomi Yaida's（矢井田瞳）"Hitori Jenga" (Playing Jenga Alone). When I was watching Yaiko perform in the video, I just went "Hey! Wait a minute...I know that place!" Yup, it was the Tokyo set in the museum. So I'm a tad worried now that something Pavlovian might happen and I will end up salivating for ramen whenever I hear this song.

In a way, though, Yaida's 10th single from September 2003 is a pretty nice match for the Ramen Museum since the song created by the singer-songwriter and arranged by her, Daishi Kataoka（片岡大志）and Akira Murata（村田昭）has that retro-rock feeling. I think it also sounds like something that Ringo Shiina（椎名林檎）would tackle as well in that sense.


Also I enjoy that one line she delivers "Aitai kedo aenai no"（会いたいけど会えないの...I want to meet you but I can't）for some reason. Yaida's lyrics come off as a bit of an old postwar film noir in the big city where a woman would dearly like to be with that one fellow but cannot due to dark circumstances from her past coming back to haunt her. The title actually refers to all of those entanglements being compared to playing that dangerous game of Jenga; how far can it be played before the whole thing comes crumbling down?

The single peaked at No. 6 on Oricon and was also put down as a track on her 4th album "Air/Cook/Sky" which came out a month after the single. It managed to get as high as No. 2.
Posted by J-Canuck at 2:39 PM