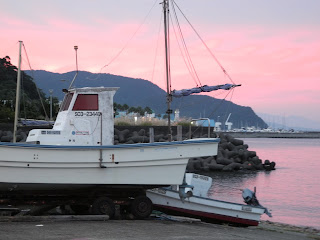 Remember last week when I informed you about all that renovation work upstairs? Well, they're still at it. In fact, today, the contractors dumped a whole bunch of detritus which increased noise levels significantly. At least, they had the common courtesy to warn us in advance, and to be honest, they have been following all noise by-laws.


So perhaps to ease a bit of my pain, some 70s folk may be just the tonic. Therefore, I cherish Cherish (チェリッシュ). The (future) husband-and-wife folk duo of Yoshitaka Matsuzaki and Etsuko Matsui （松崎好孝・松井悦子）made their fame with their cute-as-all-get-out "Tento Mushi no Samba"（てんとう虫のサンバ）in 1973, but I also like this wistful ballad titled "Koi no Funade" (Ocean Departure of Love). This was the B-side to their 12th single, "Ai no Period"（愛の終末...The End of Love）which came out in October 1974.

Haruo Hayashi（林春生）came up with the lyrics with the legendary Kyohei Tsutsumi（筒美京平）creating the music with that wonderful flute and strings. Another example of melodic chamomile tea here. I'm pretty much convinced that Tsutsumi was able to concoct fine music in any genre although I'm not sure if he ever came up with anything for X Japan (just kidding). He and Hayashi collaborated often on Cherish's songs and for this particular single, it went up as high as No. 24.
Posted by J-Canuck at 7:34 PM