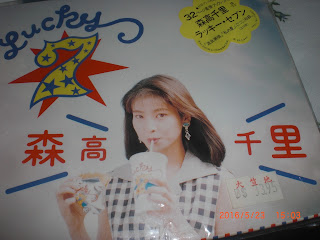 My default image of Chisato Moritaka（森高千里）has been that bouncing techno-aidoru in uniforms that would have the Las Vegas strip crying for mercy while singing in that high nasal voice. But considering that 12-year period between 1987 and 1999 when she was releasing singles, that image was really only around for a few years going into the 90s. Still, it has left such an impression that if anyone ever mentions her name, that's the image I will always get first.


So, on hearing and watching her 3rd single "GET SMILE" just now, it was interesting seeing Chisato in her early years before that image came to be. According to the original music video, her fashion was more about the dark leather or pretty regular clothes, and her voice was a fair bit lower so a lot of the nasal side was missing. I had heard bits and pieces of the song in the past but if I heard it now without the video or identity of the singer, it would have taken me several seconds to peg her as Moritaka.

Those high tones only come out in the refrain and I think the way the highest note gets delivered slightly off-center is actually quite adorable. Plus, the synthesizers by Ken Shima（島健）, who also composed and arranged "GET SMILE" bring back the nostalgic 80s for me. Meanwhile, Hiromasa Ijichi（伊秩弘将）took care of the lyrics; he had also provided a number of songs for Misato Watanabe（渡辺美里）during that decade and would come up with some of the big hits for SPEED in the 1990s.


Over a quarter of a century later in 2014, Moritaka did a self-cover of "GET SMILE" with an ambitious green screen.
Posted by J-Canuck at 2:09 PM