Every Little Thing -- Feel My Heart 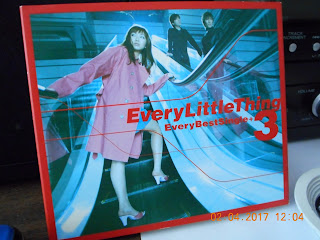 Getting past the 5th anniversary of "Kayo Kyoku Plus" recently, I started realizing that I was writing more about the songs than I had been listening to them...and no, I don't consider watching excerpts of YouTube videos as actually listening. Therefore over the last number of days, I have been pulling out some of the old albums and singles and throwing them into the CD player or on the LP turntable again.

One such CD was Every Little Thing's first BEST album "Every Best Single +3" which was a massive hit when it was released in March 1999. It not only hit No. 1 but was the 6th-ranked album of the year as it broke the 2 million barrier. It was nice to hear the old 90s Avex Trax band once more.


Of course, the first track on that album happened to be the first single that ELT released way back in August 1996, "Feel My Heart". Now, the first song that got me to buy their product was actually their 3rd single "Dear My Friend", but I do remember seeing the Avex Trax commercial hawking the band's first song with those panning shots in the desert for their music video.

I think I have mentioned it before but when it comes to long-established entities in pop culture, whether they be TV shows, comic strips and musicians, I've always been interested in their roots; namely how they were at the beginning. And so, looking at the video for "Feel My Heart", it was pretty fascinating at the start of Every Little Thing. There were three people for one thing instead of the perpetual duo that has been ELT for years and years (producer/keyboardist and the creator for this single Mitsuru Igarashi/ 五十嵐充 would leave in 2000). Vocalist Kaori Mochida（持田香織）looked a bit different: she seemed to have more makeup and bigger hair for that inaugural video. But that ELT sound was already there.

Still as much as I've waxed nostalgic about the synthesizers for Yellow Magic Orchestra back in the late 70s and early 80s, hearing those ELT synths and Ichiro Ito's（伊藤一朗）guitar also have me sighing wistfully for those Avex Trax 90s. It was quite the different pop music landscape back then with these small high-energy groups.


"Feel My Heart" got as high as No. 24 on Oricon and earned Gold status. It was also used as the ending theme for another old pop culture chestnut in Japan, "Countdown TV" on TBS, which is perhaps why I've associated Every Little Thing with that program. It used to be that the band was a perpetual fixture on the CDTV charts. The debut single was also on ELT's debut album "everlasting" which was released in April 1997. The album also did amazing business by also hitting No. 1 and breaking the 2 million barrier, becoming the 10th-ranked album for that year. Good things were coming for Kaori and company.