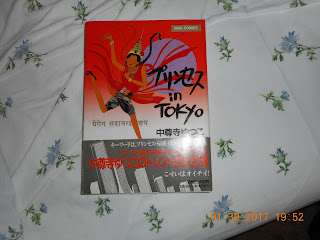 During the Holidays last year, my good friend Shard was kind enough to give me some books that he no longer needed and one of them was a manga titled "Princess in Tokyo" by Yutsuko Chusonji（中尊寺ゆつこ）. It just so happened that the late author (died sadly at the age of 42 over a decade ago from cancer) was responsible for a pop cultural phenomenon that I had heard about when I was in Gunma Prefecture on the JET Programme between 1989 and 1991. 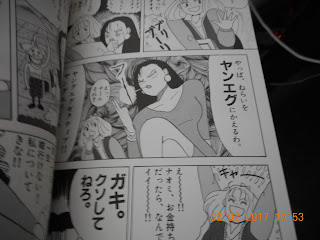 Chusonji came up with the meme of the oyaji gyaru (オヤジギャル) which literally meant old geezer girl. It referred to those urban ladies who did all the things that middle-aged guys in the corporate machine enjoyed such as leafing through the horse race results in the newspaper, smoking like chimneys, and golfing. And yet, they still liked to hit the discos while dressed in their bodicon dresses and coiffed in their straight long hair while ravenously looking for that wealthy Mr. Right. And the manga artist put all that into her creations such as "Princess in Tokyo". Even though I couldn't quite remember her name, as soon as I saw her characters anywhere, I knew immediately it was that oyaji gyaru artist.

Looking through "Princess in Tokyo", I wasn't quite sure whether Chusonji was lionizing the oyaji gyaru or lampooning them. It seemed as if some of the main characters were always ending up on the losing end of the stick. However, it was a good read for a few nights before I hit the hay. Plus it was rather fascinating seeing some of that oyaji gyaru jargon that was bandied about in the manga.

Since I was living out in the Japanese Alps at the time, I never really got to see or know any of those bodicon women in Tokyo although I did head out to the Big Sushi once a month. But, y'know, my focus was buying up a ton of CDs whenever I went and not on hitting the dance clubs in Roppongi or, for that matter, on the women there.

Of course, being the turn of the decade, it was also a big time for kayo kyoku/J-Pop as things started diversifying, and of course, one of the big bands then was Kome Kome Club（米米CLUB）. I hadn't talked about Carl Smokey Ishii（カールスモーキー石井）and company for a long time so today would be a fine time to introduce yet another one of their singles.

Their 12th single was "Hitosuji ni Narenai" (Can't Be Single) from September 1991. I read in the J-Wiki article for the song that compared to some of their earlier dynamic hits this one was comparatively subdued. Well, ouch! Still, I find it a fine tune with Ishii's great vocals and the always-wonderful sound from Big Horns Bee. I would probably say that "Hitosuji ni Narenai" is a K2C cool down effort between their more exciting songs. It's got that K2C sound but it's also got a mellow kick going for it just to relax the sweaty fans.


Perhaps the other reason for the song to be seen as one of Kome Kome Club's minor successes is that it was up against a bumper crop of hits in 1991. "Hitosuji ni Narenai" got as high as No. 3 (nothing to cry about) but it was fighting with long-selling mega-hits "Say Yes" by Chage & Aska and "Donna Toki mo" (どんなときも) by Noriyuki Makihara（槇原敬之）.

And yet even after it fell out from the Top 10, it managed to hang around for a long time between the 20s and 40s due to word-of-mouth and the strength of it being used in a Sony commercial. In fact, it was the 44th-ranked single for 1991 and it continued to hang on a year later as it came in the annual charts at No. 52. Besides, K2C didn't have anything to worry about. Their biggest hit would be coming in 1992, "Kimi ga Iru dake de"（君がいるだけで）. The song can be found on any of their BEST compilations including "DECADE".

I think it could have even become a theme song for a typical romance-comedy on the Japanese airwaves. Those lyrics talk about some guy who most likely took his long-suffering girlfriend for granted and was now suffering a crisis of possible breakup. In all likelihood, the young lady probably wouldn't have been an oyaji gyaru since she wouldn't have taken that sort of treatment for a single second....or perhaps the roles would have been reversed.