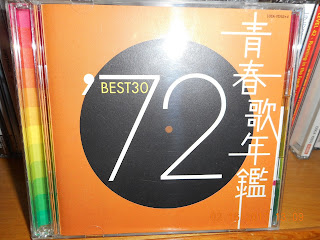 Took the night off last night since I was extremely tired from some large chunks of translation work that have been landing on me during this month. In fact, I'm still working but I made it a policy to stop at 7pm for sanity's sake. However I'm very grateful to Noelle and Marcos for putting up their respective articles on Wednesday. After reading the two of them, I'm awfully tempted to listen to one album again and buy the other.

Also, just to get my mind off work, I go to one of my hobbies which happens to be this blog.

First off, let me tell you something I do first thing in the morning. No...it doesn't always involve flushing. Actually when I wake up, I often find the TV already on with the channel set to TV Japan, and before NHK's "Newswatch 9", there is an English conversation study program titled "Shigoto no Kiso Eigo"（しごとの基礎英語...Standard English for Work）. It always involves the learning of some business English phrases in the setting of a fictional corporation based in Japan with the mixture of sitcom-friendly native English speakers and Japanese staffers who are fairly fluent in their second language themselves.

Now, the program, and its other cousins, have been on for a few years now at 7:55 am, and with "Shigoto no Kiso Eigo", the star of the show happens to be this fellow named Aki who's not quite as fluent as his comrades in the company. Well, a few days ago, my mother asked me if I knew who he was. As I said, I have been very familiar with Aki since he not only stars in this English conversation show but also appears sometimes as a reporter on the other NHK program "Asaichi"（あさイチ）. So I figured that Mom had some trivia for me.

Well, I got out of my groggy state fairly quickly that morning when she told me that Aki happens to be actor/tarento Akinobu Shinoyama（篠山輝信）. He is the son of famed photographer Kishin Shinoyama（篠山紀信）and former aidoru Saori Minami（南沙織）....yep, the same one who had gotten her fame right from the get-go with "Juu-nana Sai"（１７才）all those decades ago.

So on that note, perhaps it's time to put in a Minami song tonight. Here is "Tomodachi" (Friends), a nice and breezy tune about that familiar pop cultural trope of a girl in love with a guy but, gosh darn it, can't string the words together to tell him how she feels.

Written by Mieko Arima（有馬三恵子）and composed by Kyohei Tsutsumi（筒美京平）, "Tomodachi" has that typical early 70s sound of happy-go-lucky. However, those strings sound almost downright disco at times. Gives the song some extra juice, and the horns provide a bit of a comical touch to the proceedings. Although I don't think Minami's 3rd single from February 1972 was ever used as such, it could have become a theme for a family comedy-drama.

A few nights ago, I wrote an article about Chiyoko Shimakura（島倉千代子）and how her song came about due to something that was connected with her personally. Well, the same thing was true about Saori Minami and "Tomodachi". At the time of her stardom, Minami had been living out of hotels and confessed to her staff around her that it was difficult to make close friends. From that spark, "Tomodachi" got its genesis. The song managed to get as high as No. 7 on the weekly charts and would eventually be ranked No. 55 for 1972. It was also included on her 3rd studio album "Junketsu/Tomodachi"（純潔/ともだち...Purity/Friends）which was released later in June. That album peaked at No. 2.

One wonders if Aki's Mom will make a surprise cameo on that English conversation program and show him up!
Posted by J-Canuck at 8:51 PM