the Indigo -- Under The Blue Sky 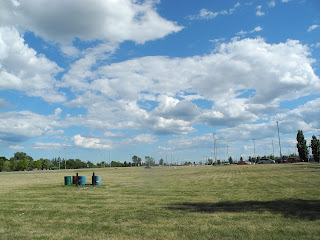 It was the usual Sunday outing with my anime buddy today although we did catch some of the Super Bowl during dinner tonight. Got home less than an hour ago to see that things were looking pretty exciting down to the wire....when it shouldn't have been. The Falcons were supposed to have had this game in the bag.


Anyways, earlier in the day, there was anison time. And I got to hear something again that I had forgotten to write about last year so this is me making amends right here.

I never saw the 2003 anime "Mahoutsukai ni Taisetsu na Koto"（魔法遣いに大切なこと...Someday's Dreamers）but from what I've read in the Wikipedia summary, it sounds like a show that I would have liked...a pretty gentle storyline about magical folk living in the bohemian Tokyo neighbourhood of Shimo-Kitazawa. Perhaps it was something akin to another anime that I had seen early last year, "Flying Witch".

Considering the continuing gloomy weather out there today, it was comforting to hear the ending theme for the original series, "Under The Blue Sky" by pop group the Indigo. It has that sunny and laid-back feeling (love the guitar especially) that fits it quite well with Shimo-Kitazawa. I only know the band through this song but it currently consists of vocalist Miki Taoka（田岡美樹）and Yuuichi Ichikawa（市川裕一）on composition and arrangements although it started out as a trio back in 1998. Taoka took care of the lyrics for this song with Ichikawa providing the music.

I visited Shimo-Kitazawa a few times in the past and in a number of ways, it reminded me of Toronto's Kensington Market, thanks to the funky atmosphere and eclectic shops and restaurants. There was one okonomiyaki restaurant, I think it was called Otafuku, which I visited with a few friends; it specialized in Hiroshima-style okonomiyaki and it was there that I could believe that half a head of lettuce could be reduced to a flat mass of green to fit between the two large discs of okonomiyaki.

During my NOVA days, I had the opportunity to be transferred to the Shimo-Kitazawa branch but at the time, I was too tied to my students and teachers in Asakusa to accept. I have had some mixed feelings about not accepting the offer since then, and if I head over to Tokyo on a visit again, I will drop by the neighbourhood.
Posted by J-Canuck at 11:05 PM