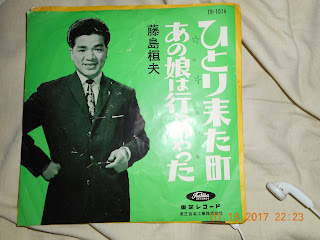 Another browsing through the magic Canada Dry plastic bag of 45" singles revealed this green cover. I don't recollect ever seeing this man before on the old kayo shows although his voice has rung a bell on the old RCA stereo. His name is Takeo Fujishima（藤島桓夫）and Noelle actually wrote about him for his big hit "Otsuki-San Konbanwa" (お月さん今晩は) almost a couple of years ago. Seeing him on the cover here, I think he looked downright cherubic.


Although I couldn't find the songs from my Dad's record on YouTube, I did manage to find one of his other big hits. In addition to the fact that he was well known for sporting a sailor uniform or a casual kimono on stage, Fujishima (who passed away in 1994) did a number of songs which were collectively known as the "Minato" (port) series since that word was in each of those song titles.

One of those songs was "Kaeri no Minato" (The Home Port) from 1955. Fujishima had that unique and comforting nasal voice which he used to convey thoughts about heading back home to the islands wherever they may be. Kazuo Toyoda（豊田一雄）wrote and composed the song and the Osaka-born singer delivered it almost as if it were some sort of jaunty lullaby. The feelings of being away from home and homesickness have always been the sentimental thing for the Japanese so I'm not surprised that this song would bring a twinge to someone's emotions.


The video above has him coming out in that sailor get-up and his voice has certainly mellowed out in the years following its initial release back in the 1950s. "Kaeri no Minato" provided Fujishima's first appearance on the Kohaku Utagassen, and he was a mainstay on the New Year's Eve special for 7 straight years from 1956 to 1962.
Posted by J-Canuck at 3:33 PM