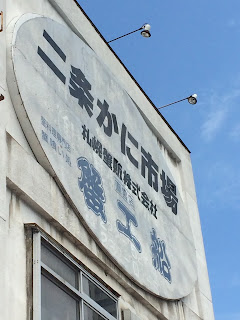 Back in Sapporo last summer, one of the places we visited was the famous Nijo Market with the intention of having a spot of breakfast. That snapshot up there was the sign above the joint across the street where we had our crab - bought from the market - prepared. Not a fan of the crustacean, but I have to admit that that was one of the best crab I'd ever had. We had also bought a box of fresh sea urchin from a different store for a taste, and that was where I learnt that sea urchin could taste sweet and non-fishy. So it is true what they say about Hokkaido seafood.

Anyways, the name of the joint is "Kanikosen" (the words in blue) or Crab Cannery Boat, which is accurate for a restaurant boasting crab products, but what piqued my interest was recalling Hideo Murata (村田英雄) had a song of the same name.


"Kanikosen", the song, was put together by renown songwriters Minoru Endo (遠藤実) and Tetsuro Hoshino (星野哲郎). While a big chunk of enka revolves around hardened fishermen hoping to get a good haul of large fish, this is the first time I hear of one where the target is crab. Still equally as tough and hazardous though as seen in those "Deadliest Catch" commercials. In that sense, the gritty Muchi was perfect for a tune like this.

With some research, I believe Hoshino based the lyrics on "Kanikosen", the novel (circa 1933), which highlights the struggles of the crew and the horrid conditions they are subjected to aboard the crab fishing boat. To complement the plot, Endo's music is manly and foreboding thanks to the combination of high-pitched strings and deep horns. However, there's this one bit I found interesting - the clashing of cymbals and the flute whistling away after the first stanza. It's probably to represent the ship getting caught in a storm blowing across the northern sea, but it felt almost like something I'd hear in an old Disney movie... like when the evil queen was turning into the witch in "Snow White" or something like that.

"Kanikosen" was released early in Muchi's professional music career in 1959. The clip below has Eisaku Ohkawa's (大川栄策) rendition of "Kanikosen" during a "Nippon no Uta" episode from quite a while ago; that was where I had first learnt of this song.