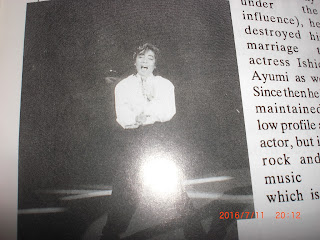 Last week, I mentioned about last week's episode of "Uta Kon" (うたコン) which highlighted the works of lyricist Yu Aku（阿久悠）, and in that particular show, I found two songs that I had never heard by Aku. One song was the dark "Zange no Neuchi mo Nai"（ざんげの値打ちもない）by Mirei Kitahara（北原ミレイ）that I have already written about.

The other song was performed by Kenji Sawada（沢田研二）, "Toki no Sugi Yuku Mama de" (As Time Goes By). This was Julie's 14th single from August 1975, and according to J-Wiki, this was the singer's biggest hit in his career.


Now that's quite something for me to hear since Sawada was one of the first artists that I got to be introduced to when I finally fell for kayo kyoku hard in the early 1980s. His image as a shape changing New Wave singer along the lines of David Bowie was firmly entrenched into my mind after seeing him in successive Kohaku Utagassen in 1981 and 1982, especially that first performance when he came out to do his hit "Stripper" (ス・ト・リ・ッ・パ・ー). I don't think it's quite the exaggeration when I say that he was the agent provocateur in the White team lineup that year.

But going back several years to 1975 in between his old Group Sounds days with The Tigers and his glam rock period going into the 80s, long-haired Sawada seemed to have been exploring his pop/rock and perhaps some blues, too. With "Toki no Sugi Yuku Mama ni", he was the prime actor in relating Aku's story of a fellow perhaps on his last legs trying to remember back to a past happier age. Not quite as dark as "Zange no Neuchi mo Nai", there may be a hint of a light at the end of an especially long and dark tunnel...if he can just move his life a degree in some direction, perhaps he can recapture his love once more.


Katsuo Ono's（大野克夫）music and arrangement has the song sounding quite intimate for the most part aside from some pretty epic inclusion of horns. That bluesy guitar, for instance, has me imagining the poor protagonist stumbling about in some dank and dirty alley after getting a major beating by some unpleasant people. It's just him, puddles and some cracked crates. And Sawada does a great job in telegraphing the sadness, loneliness and perhaps some slim hope through his languid delivery. That image of the singer is about as far away from the weird clothes and lip gloss as The Thin White Duke was from that little boy named David Jones from Brixton, England.

And certainly, it was something that has me seeing Aku in a different light after all of those other songs for Pink Lady（ピンク・レディー）and Hiromi Iwasaki（岩崎宏美）.

"Toki no Sugi Yuku Mama ni" won three prizes including the Broadcast Music Prize at the Japan Music Awards（日本歌謡大賞...not to be confused with the Japan Record Awards）that year. It also hit the top of Oricon for 5 weeks running before becoming the 4th-ranked single of 1975. And of course, the Kohaku Utagassen came calling. Finally, it has been covered not only in his native Japanese but also in English, Mandarin and Cantonese.