By now, I think a good chunk of folks around the globe have seen or heard or read about that last-minute blunder about the Best Movie Oscar for the 2017 Academy Awards a couple of nights ago. I almost felt like sending a tweet to late-night comedian and host for the Oscars Jimmy Kimmel: "Man, are YOU going to have one heck of a monologue tonight!"

The one columnist over here gave the broadcast a rare thumbs-up in spite of or because of the historic ending although I'm pretty sure critics were all over the spectrum in terms of how much they liked it. As for me, I finally gave up on the Oscars several years ago after watching the Seth MacFarlane debacle.

So, on that note, I thought it would be nice to finish off February with Teresa Teng's (テレサ・テン) "Scandal". Plus, it's been a long time since I put up one of her tunes on the blog. I actually listened to my lone BEST CD of hers recently and came across this number which seemed to be a bit atypical for a Teng tune since it had that strutting and bossy arrangement by Yasuo Sako（佐孝康夫）with the music by Takashi Miki（三木たかし）that I would usually attribute to a song by Hiroshi Tachi（舘ひろし）.

The lyrics by Toyohisa Araki（荒木とよひさ）are from a woman's point of view. The woman might be working in a hostess club or she may be the proprietor of some bar in Shinjuku but in either case, she is holding a major torch for a gallivanting fellow who enjoys painting Tokyo red and presumably meeting a whole bunch of women along the way. You would probably think with lyrics like those, the music would be somewhat more melancholy much in the way of the ballads that I usually associate Teng with. However, the spritely melody indicates that the woman in question isn't all that torn up about her crush; that's just the way he is, she reckons. She might be the Moneypenny to the guy's James Bond.


I'm not sure where the scandal in "Scandal" is. Perhaps the heel is already married with kids but he enjoys his "hobby" much more. Then again, a womanizer like him will probably get his comeuppance someday. In any case, it's interesting looking at the above performance on "Yoru no Hit Studio"（夜のヒットスタジオ）and seeing Teng all dolled up with sunglasses, to boot.

Her 17th single was released in November 1986 and peaked at No. 69 on Oricon. "Scandal" is a song that I have heard before so I'm guessing it's been covered numerous times on the kayo shows over the years. Considering how happy-go-lucky it is, I think it would be a favourite for the singers to perform. 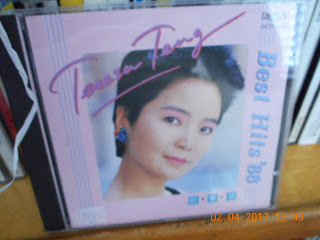