w-inds. -- LOVE IS THE GREATEST THING

Since I started listening to Japanese Pop more than ten years ago, I’ve never cared for w-inds. However, as I was watching the 2007’s edition of NHK Kouhaku Uta Gassen (NHK紅白歌合戦) a couple of weeks ago, w-inds. came up and performed a pretty fun disco-pop song called “Beautiful Life” that made me want to listen to some of their other stuff.

Trying to be somewhat smart, I thought to myself: if I liked “Beautiful Life”, I just have to listen to the single before or after this release, because it’ll probably have a similar sound. And that’s how I came across “LOVE IS THE GREATEST THING”, which was originally released four months before “Beautiful Life”.

Released in July 2007, “LOVE IS THE GREATEST THING” is also a contemporary pop song with some disco elements in the arrangement. I could see the background music being a little louder (it sounds a little too far away at some points), but I liked how they enhanced the old disco mix of brass and strings putting some nice sound effects on it… you know, trying to make it sound like a 21st Century production. In all honesty, though, the funniest thing about the song is how lead singer Keita Tachibana (橘慶太) reaches some high, wacky and over the top notes through the catchy chorus. It’s so, so wrong, but also very fun. In the end, I like Keita’s vocals, so I think he’s a very talented guy.

At first, I thought w-inds. only did boring hip-hop/urban songs, and I wasn’t totally wrong. However, they also had some pretty fun pop songs like these two I’ve mentioned so far, but also “IT’S IN THE STARS”, which was released in 2006. It’s just ironic how, thanks to some sort of prejudice, I didn’t check their songs before… but like the old saying, it’s better late than never.

“LOVE IS THE GREATEST THING” reached #4 on the Oricon chart, selling 34,416 copies. Lyrics were written by shungo., while music was composed by Henrik Korpi, Jens Bergmark and Lisa Millett. As for the arrangement, Koma2 Kaz was the responsible. 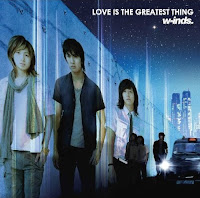 Email ThisBlogThis!Share to TwitterShare to FacebookShare to Pinterest
Labels: 2007, Aidoru, J-R and B, Pop, Single, w-inds.