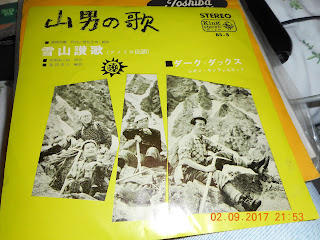 It's rather amazing about this Canada Dry plastic bag that has been filled with my father's old collection of 45" kayo singles. I always seem to find another new record that I had not noticed before. At this point, I am wondering if the bag has some sort of connection with Doraemon's pocket.

To wit, a few days ago, I came across this 45" single in the grab bag. It was a release by the vocal group Dark Ducks (ダークダックス) called "Yama Otoko no Uta" (Mountain Man Song) on the A-side with "Yuki Yama Sanka" (Snowy Mountain Hymn) on the B-side. As you can imagine, there seems to be a guiding theme here. The Japanese do love their mountains and mountain climbing. My former weekly English circle made it a habit of hitting the peaks a few times a year and they wisely did not invite me along.


"Yama Otoko no Uta", according to J-Wiki, turned out to be Dark Ducks' most successful hit and supposedly it was released in February 1966. However, the cover sheet on the record I've got here is actually dated 1964. As would be the case for many a Japanese song about mountains, the melody is a jaunty one with hand claps and an accordion, perfect to accompany a group of climbers on their hike up. However, it isn't known who created the music but the lyrics, which seem to give a cheerful warning via 7 short two-line verses to some girl about marrying a mountain man, were written by Nobuo Jinbo（神保信雄）. The sixth verse even warns the lass not to let their sons become cowboys....er, I mean mountain men.


If "Yuki Yama Sanka" sounds familiar, well that's because it is a cover of a tune that I used to hear as a little kid, "Oh My Darling, Clementine". According to Wikipedia, the original song was made by Percy Montrose all the way back in 1884, and it was a humourous poke at the Western ballad with a fellow bereaving the loss of his darling Clementine, the daughter of a miner, with the large Size 9 feet...until he found solace with his sister.

The Japanese involvement with the ballad happened in 1927 when scientist and alpinist Eizaburo Nishibori（西堀栄三郎）was with his mountain-climbing club fellows from Kyoto University. In January of that year, they found themselves stranded for a while at Kazawa Onsen in Gunma Prefecture. To stave off boredom, Nishibori and his friends decided to make up a song for their club, providing their own lyrics over the base melody of "Oh My Darling, Clementine". Their little project ended up as "Yuki Yama Sanka".

Dark Ducks' first version was released in 1958. I guess it was a fairly usual thing for various original singles' A-sides and B-sides to be placed on future records under different combiantions on vinyl over the years so it also ended up on my Dad's record from 1964.


I already wrote about Dark Ducks in one other article back in late 2013 when they gave their own version of "Aoba-jo Koi Uta"（青葉城恋唄）. However, their video of them performing the song got cut down without any replacements to be found and in fact, I didn't even give them a proper introduction. So, allow me to make amends to you and to Dark Ducks.

When Dark Ducks first formed as a vocal group in 1951, they started out with just 3 people: Tohru Sasaki（佐々木行）, Tetsu Kiso（喜早哲）and Hajime Tohyama（遠山一）. All three of them were attending Keio University and belonged to the Economics Department; at the same university, they also participated in a chorus group and at a Xmas party in that year, they performed "White Christmas" which sparked the idea for the three to officially start the Ducks. Hiromu Takamizawa（高見澤宏）would later join them.

At the time of their formation, they focused mostly on jazz numbers and spirituals but would also extend their repertory to Russian folk songs and mountain songs. In fact Dark Ducks' first hit was "Tomoshibi" (ともしび...Spark) in 1957 which was a cover of a Russian song "Огонёк" by Mikhail Isakovsky.

Sadly, after a long career, three of the Ducks have passed away in the last six years including the deaths of Sasaki and Kiso in 2016, leaving Tohyama as the sole surviving member. The above video has Dark Ducks starting off another episode of "Yoru no Hit Studio"（夜のヒットスタジオ）with their cover of Momoe Yamaguchi's（山口百恵）"Hito Natsu no Keiken"（ひと夏経験）at 2:30.


To finish off, here is a version of "Oh My Darling, Clementine".
Posted by J-Canuck at 8:58 PM