A Brief History of City Pop by Van Paugam 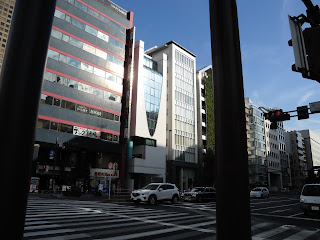 As many of the readers of "Kayo Kyoku Plus" have probably figured out by now, my favourite genre in Japanese pop music is City Pop. Although I have enjoyed songs from all over the kayo/J-Pop spectrum from enka to rock, there has always been something about City Pop that has made it my home base. It's a combination of factors: my falling in love with the grand megalopolis of Tokyo when I landed there in the summer of 1981 and also getting into music in general (especially R&B) on my side of the Pacific at about the same time. Heck, I even bought that bible "Japanese City Pop".


Well, a few nights ago, I encountered "A Brief History of City Pop", a 15-minute YouTube video made by Van Paugam, one of the fellows that I've subscribed to, and it's a nice little course done up as a long-form Vaporwave/Future Funk creation (love the John Travolta commercial in Japan) while sultry narrator Meikonishi gives a description of the genre juxtaposed against and influenced by the history of modern Japan from the mid-1970s and well into the 1980s. A few performances and some of the finest albums of City Pop are shown with the mini-doc even touching a bit upon New Music and technopop.

As someone who ended up collecting the entire series of "Jazz" by Ken Burns on DVD, though I'm grateful for the book "Japanese City Pop", I've always wondered about something televised not only on this genre but on kayo kyoku and/or J-Pop on the whole. So I'm glad that Van Paugam was able to create this video. And also as someone who had his brief immersive experience of Japan during the heyday of the Economic Miracle in July 1981 with the video game cafes, skinny cans of Coke and YMO, there was a fair amount of sepia seeping into the neon glow of the images. All that bass fed by a thousand vitamin drinks and the Fender Rhodes piano would become the theme song for my memories there.

The wording can get a bit pithy at times, though. There is that one quote at 10:48:

Newer genres called Vaporwave and Future Funk emerged around 2011 and would come to rely heavily on sampling City Pop but often not crediting the original artists, leaving the source materials as obscure relics only to be plundered to create disaffected and often dystopian themes of mindless capitalism.

I mean, I've read and heard the whole thing behind Vaporwave as a somewhat satiric slap at the party-hearty 80s, but I wasn't aware that slowing down a pop song to quarter-speed could squeeze all that philosophy out. Geez. Plus, if the original songs were initially seen as obscure relics, I think that for a certain group of people including myself, they haven't stayed that way for long. I've seen comments on YouTube for individual Vaporwave/Future Funk pieces which inquired about what the original songs were and how they could be acquired. If those folks are like me, they have most likely gotten their own copies through download or the old-fashioned medium of CD or even vinyl. So, not so obscure. I kinda wonder whether the originating recording companies or shops such as Tower Records and CD Japan have been surprised by any uptick in demand for these City Pop albums from overseas. All in all, I'm just happy that this subset of Japanese music has started to gain some traction with a subset of folks from around the world.

To be honest, I was gonna mention the above as a mere prelude to one of the songs featured in the video, Momoko Kikuchi's（菊池桃子）"Blind Curve", but it looks like my ardor got the better of me. Therefore, "A Brief History of City Pop" has gotten its own article. Many thanks, Van Paugam!
Posted by J-Canuck at 10:59 PM