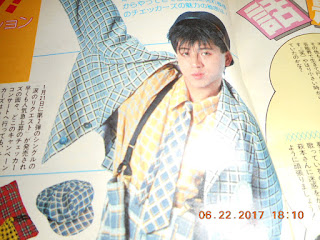 Long time, no see, Checkers! Welcome back. I still marvel at the old days of my 80s love affair with Japanese music through "Sounds of Japan" and my biweekly visits to Kuri the karaoke lounge in Yorkville. Checkers was part of those memories and another thing that impresses me is how these guys from Fukuoka captured the hearts of fans in Japan with their 50s rock-and-roll sound and their mix of preppie punk and belated New Romantic in terms of their fashion sense. Sha-Na-Na meets Culture Club, in a way. You can take a look at "Namida no Request"（涙のリクエスト）to try to understand.


I think I've covered most of the Checkers' songs that I knew from the above sources and beyond but there are still a few more to delve into. One song is "Ano Ko to Scandal" (A Scandal With That Girl) which perhaps didn't have as high a profile at Kuri as the other hits did, but I still know it for vocalist Fumiya Fujii's（藤井郁弥）delivery of "Wow Wow Wow!"

This was another hit tune as well as Checkers' 6th single from March 1985 concocted by the duo of Masao Urino and Hiroaki Serizawa（売野雅勇・芹澤廣明）who had also come up with "Namida no Request" as well as the band's previous single "Julia ni Heartbreak"（ジュリアに傷心）. That song ended up becoming the No. 1 single of 1985.

With all of these songs about love in terms of happy romance or sad heartbreak, it's actually refreshing to find out that "Ano Ko to Scandal" goes off on a different tangent in that it has the theme of eloping...or perhaps the fantasy of one. The protagonist is massively envious about the girl of his dreams going out with another fellow and would like nothing better than to convince her of his charms and then flee out of town in unholy unofficial matrimony. One interesting point is that going through Urino's lyrics, it almost reads as if the lyricist had the climactic scene from "The Graduate" in his head when he was writing the words, although the melody comes from a time about a decade before the Dustin Hoffman movie.


"Ano Ko to Scandal" also hit No. 1 on the Oricon weeklies and didn't do too shabbily on the yearly rankings as well, finishing 1985 at No. 5. However, it was never placed on an original album but there was an earlier version of the song which had the title of "Scandal Machi"（スキャンダル魔都...Scandal City of Evil）and was recorded onto Checkers' 3rd album, "Mainichi!! Checkers"（毎日!!チェッカーズ...Everyday!! Checkers）that came out a few months after the release of the official single in August 1985. The arrangement is basically the same but the lyrics are different in that the plot is now about paparazzi going for that salacious photograph. This was also another No. 1 album for the band.
Posted by J-Canuck at 8:35 PM