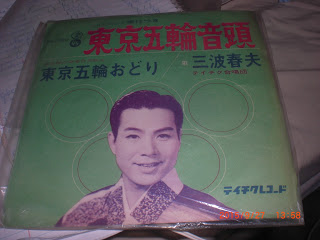 Hard to believe that almost 4 years ago, I wrote about Haruo Minami's（三波春夫）"Tokyo Gorin Ondo"（東京五輪音頭）just when it was announced that Tokyo was indeed getting the 2020 Olympics. Well, last week, it was announced that an updated version of the song will be the official song for the Tokyo Games. No surprise, there...I was fully expecting that it would be used in some capacity at the Opening Ceremonies. With "Tokyo Gorin Ondo" as the official song, there would be no worries about tracking down hotshots from the recording industry to craft a new tune, and the 1963 song is overflowing with Japanese culture. Plus, it's festival season in Japan in the summer so it works in that sense, too.

As for those who might be disappointed in the decision, there will be other more contemporary songs being put out at the Opening Ceremonies, and I'm positive that each of the TV stations will have its own Olympics theme songs up and ready. Personally, I would still love to hear Yellow Magic Orchestra get together for one more go at "Rydeen" in the new arena or if Sakamoto and Hosono are not physically up to it by that time, maybe Yukihiro Takahashi and METAFIVE can take over. Just a thought💖.


"Tokyo Gorin Ondo" is already up here so to commemorate its status as official song, why not talk about the B-side? That would be "Tokyo Gorin Odori" (Tokyo Olympic Dance) which was written by Jun Kobayashi（小林潤）and composed by Yoshiji Nagatsu（長津義司）, the same fellow who came up with another Minami chestnut, "Chanchiki Okesa"（チャンチキおけさ）all the way back in 1957.

Now, frankly speaking, the two songs "Tokyo Gorin Ondo" and "Tokyo Gorin Odori" are different but still quite similar in arrangement, and I cannot tell you the difference between an ondo and an odori. I know the latter means "dance", but the ondo also invites dancing. Perhaps the difference lies in the rhythm, but perhaps my two friends in the Japanese dance community, Laura and Aja, can set me straight on this question if they read the article.

In any case, going through the record's liner, I found out that "Tokyo Gorin Odori" had been produced for the Tokyo Haha-no-Kai Rengokai（東京母の会連合会...The Tokyo Federation of Mothers' Associations）, and it's a similarly festive number by Minami. The liner even has illustrations on how to dance to both songs, and you can see the one demonstration for "Odori" above. I also found out that the original 45" cost all of 290 yen!


I didn't realize that the video I had brought in for "Tokyo Gorin Ondo" also contained the B-side at 3:55 so you can hear the original here as well. One wonders whether there will be similar instructions to dance at the Opening Ceremonies. Still, I can only imagine that Minami who passed away in 2001 may be looking down at Tokyo quite happily to see one of his famous hits being brought back again for another Olympics.


As a PS, apparently Teichiku Records decided to have the Vocaloid people come up with their own version of Haruo Minami, known as Haruo-roid Minami（ハルオロイド・ミナミ）last year. So, it was a foregone conclusion for "Tokyo Gorin Ondo" to be performed.
Posted by J-Canuck at 8:07 PM