Just last month, I was thrilled to able to live out one of my favourites by Hachiro Kasuga, "Yama no Tsurihashi", by standing and walking on a suspension bridge that happened to be in the mountains. The bridge I was on wasn't in the mountains of Japan, rather it was near Grouse Mountain in Vancouver, Canada - close enough. While it was a little intimidating at first, considering how high the Capilano Suspension Bridge is from the ravine and the fact that it sways (just as Hachi sang), it turned out to be a quite an exhilarating experience - thank goodness I don't have vertigo. I likened it to walking on a boat.

Anyway, coming back to the song itself, "Yama no Tsurihashi" is a rather jolly tune in terms of both its music and words. Kenji Yoshidaya (吉田矢健治), known for creating Kasuga-bushis, composed a lighthearted melody that moves along a steady rhythm which I equate to someone, perhaps a local villager or a tourist, taking a leisurely stroll, and the sharp blare of the trumpets and flute gives the impression that said person is in high spirits. Responsible for the lyrics was Hiroshi Yokoi (横井弘), and it could be about our main character observing those who cross the swaying suspension bridge. There's a hunter with his dogs going bear hunting, a girl who seems to be waiting for her lover to return from the city, and a charcoal maker who enjoys his sake. On a whole, "Yama no Tsurihashi" could be fit for a "Minna no Uta", with the scenes being played out in a colour pencil-drawn MV.

"Yama no Tsurihashi" was released in September 1959 and was one of Hachi's hits. I came across "Yama no Tsurihashi" along with Michiya Mihashi's (三橋美智也) equally jaunty, "Iwate no Osho-san" (岩手の和尚さん) via Kouhei Fukuda (福田こうへい) in that same episode of "Shin Nippon no Uta". You can check out Fukuda's version below. He did a pretty good job, though it sounded like he just managed to hit the lowest note. 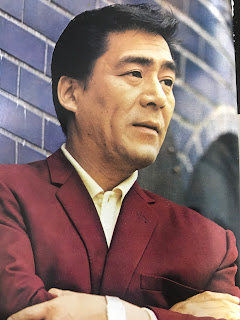