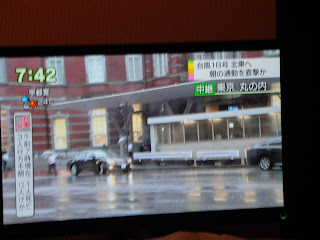 I've been hearing about and seeing the band SEKAI NO OWARI for the past few years but have yet to really get into them. I believe they've been on NHK's Kohaku Utagassen at least a couple of times and musically, they come across as something of an alternative folky pop-rock group. They certainly stand out for their name and for the fact that one of their members, DJ Love, perpetually wears a clown mask (the band is currently on its second DJ Love as of this writing).

As for the name which means "The End of the World", Wikipedia didn't bother explaining it but there is one for the J-Wiki entry. Apparently, vocalist Fukase was the one who came up with it as he stated that during a time when it felt like the whole world was ending around them and the band felt like it was just them and their music remaining, they just figured to start from that end. That's quite the war story.

The other night on "Uta Kon"（うたコン）, SEKAI NO OWARI appeared on location as guests for the weekly NHK show, and that location happened to be in the middle of a massive industrial complex. The intro was that currently, tourist tours of industrial complexes at night was a big niche hobby. As someone who has visited such a complex way west of Tokyo once to teach a class, I can say that it's a typically Japanese pop cultural thing whose time has come. It was terrifying and awesome approaching this petroleum megaplex that looked like a Borg cube or a scene from "Blade Runner".


In any case, the band was dropped into one such complex to perform their most recent single which just came out a few days ago. "RAIN" actually touched a nice nerve within me; it sounded hopeful and adorable at the same. So perhaps it's not that surprising to find out that the band's 11th single has been slated to be the theme song for an animated motion picture coming out tomorrow titled "Mary to Majo no Hana"（メアリと魔女の花...Mary and the Witch's Flower）by Studio Ponoc about a girl named Mary who becomes a witch for a night. I guess there really is something about Mary (cough, cough).

Fukase and keyboardist Saori wrote the lyrics and composed the music with bespectacled percussionist Nakajin. I have pegged the members with their instruments but it looks like all of them are very well cross-trained including vocals.


Perhaps the irony of the band's latest title worked all too well. SEKAI NO OWARI was supposed to have performed "RAIN" live on "Uta Kon" but as a lot of Japan watchers know this week, there have been some major poundings of precipitation scouring the nation. They actually had to tape the performance some minutes beforehand when things were still logistically manageable and the band members looked like they were barely hanging onto the deck when they were being interviewed live. Maybe at that point, Fukase and company were thinking that it was truly the sekai no owari.
Posted by J-Canuck at 8:08 PM