Like a lot of folks, I was exposed to comedy at a fairly early age whether it be the old Charlie Chaplin or Laurel & Hardy movies. I remember laughing like a hyena at Bob Hope's monologues and looking with a mix of laughter and confusion at the zaniness of Monty Python. Then, there were, of course, all those classic sitcoms such as "The Dick Van Dyke Show", "The Mary Tyler Show", "Cheers", "Frasier", etc.

On the Japanese side of things, though, I think there have been three basic forms of comedy. The first one I encountered was the old sketch comedy routines of The Drifters via their long-running TBS Saturday-night show "Hachi-ji da yo! Zen'in Shuugo"（8時だョ!全員集合...It's 8 O'Clock! Everyone Get Together）. In later decades, I saw the lone comedians who didn't do stand-up routines but got their 15 minutes in the spotlight due to some hilarious action or turn of phrase that would stay with the audience for several months to a year. And then there are the manzai duos who have existed since the Heian Era.

The manzai duos consist of a tsukkomi (straight man) and a boke (funny man) who do some rapid-fire routines. Probably the closest equivalent I can come up with in comedy on my side of the ocean is Abbott and Costello. They came up with the famous "Who's On First?" routine, and like the manzai guys, straight-man Abbott always abused poor befuddled Costello.

In all honesty, although I did enjoy the banter of the Osakan duo Downtown, I never really got into manzai. For me, it was more fun to watch the sketch comedians ( I guess "SCTV" and "Saturday Night Live" ruined me on that front) and a few of those comedians with their catchphrases. However, I still see a number of the manzai duos on various shows including one duo who has been around forever (or at least 1975) called All Hanshin Kyojin（オール阪神・巨人）. I don't know any of their routines but the fellows are notable for one guy All Kyojin towering at 184 cm while his partner All Hanshin (whose real name is Akinori Takada/高田昭徳) is a short fellow at 161cm. I've seen the duo on shows such as NTV's "Shoten"（笑点）and an NHK program called "Variety - Seikatsu Shohyakka"（バラエティー生活笑百科...The Law and Laughter）.


What I hadn't expected to see was one of the two guys actually singing a wistful kayo when I got back from lunch with my old friends yesterday. At first, when I sat down in the armchair, I couldn't quite recognize the fellow but then when he stood up to his full height, I realized it was All Kyojin.

Apparently in May 2016, All Kyojin whose real name is Shigeru Minamide（南出繁）, released his own single titled "Otoko no Komori Uta" (A Man's Lullaby). Written and composed by Mizuo Ohgata（オオガタミヅオ）, I find it to be quite a relaxing sepia-toned song that has a man reminiscing over certain things in his life such as that special woman who got away. Perhaps the fellow is now in his twilight years and realizing there's not so much time left, he simply wants to go over the old memories one last time.

All Kyojin is not the only comedian I've seen put out his own record but I have to say that I like his brand of kayo. 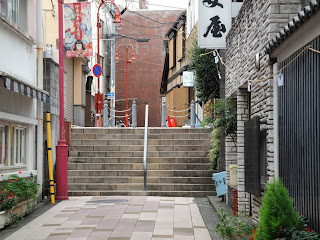