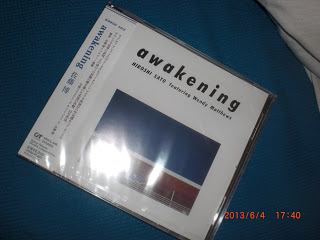 Well, I would have written up this follow-up on Hiroshi Sato's（佐藤博）"Awakening" (1982), one of the representative albums of City Pop, sooner but another one of those staffing bombshells at the White House went off again and then there was the news about Major League Baseball's trading deadline which will hit in a few minutes. And it looks like the Blue Jays will be getting Norichika Aoki's services for at least a few months. I don't think he's quite as goofy and lovable as Munenori Kawasaki, though. So, no bush parties (inside joke).

Anyways, I listened to "Awakening" again after a while and it's still smooth as fine butter. I've already covered some of the tracks in the original article from 2013 along with individual tracks "I Can't Wait" with singer Wendy Matthews and the bouncy "Say Goodbye". And back in that article, I mentioned that Sato had a number of influences and that the album itself gave off vibes of Gino Vannelli and Boz Scaggs. Listening to it again, I then figured that there were even a couple of Steves in there: Steve Winwood and Stevie Wonder. Perhaps "Awakening" is even more well-titled then since with every listening, some new insight or echo of another singer may come to mind.

First off, I have to give an apology since I omitted a key player in the production of "Awakening" and that person is Lorrain Feather who wrote all of the English lyrics for the tracks.

Track 5, "Love and Peace" at 15:50 is a really low and slow mellow and funky/bluesy instrumental by Sato which is the equivalent of a satisfying sparerib dinner with your favourite liquid poison.

"From Me To You" at 20:29 (it was the first track on Side B of the original LP) is a track that I've talked about before in the original article. It's the cover of a Beatles song so Lennon and McCartney were responsible for it, but the notable thing about Sato's version is how much he sounds like British 80s singer Howard Jones.

Track 8 is "It Isn't Easy" at 28:39. Wendy Matthews is back to sing about getting back on one's feet after the end of a relationship and although she's well on the mend, she still misses the lug. There is an interesting Asian element in the music.

The instrumental title track as Track 9, "Awakening" at 33:13, has a near-YMO vibe. Perhaps it's not surprising since I think there are at least a few of the instruments used that Yellow Magic Orchestra has taken control of such as the Synclavier. It's the most technopoppy and trippiest track of the album.

Here's hoping that the album stays up for a little on YouTube while at least and that at least some of the listeners will decide "Awakening" is deserving of a spot somewhere on their shelves.
Posted by J-Canuck at 4:29 PM