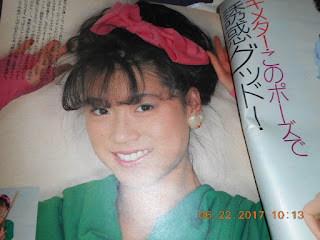 As I write this, it is now July 13th in Japan. So, of course, that means it is Akina Nakamori's（中森明菜）birthday for which I wish the bonnie lass a Happy 52nd. I'm not sure what she has been up to lately and I don't even know where she is (Japan or the United States?) but I'm hoping that she is healthy and doing well.

I was thinking about which Akina tune I could write about today on this day this time. Do I go back to her aidoru roots or pick something more along her diva route much later in the 1980s and beyond? Well, I decided to opt for a track from her "Cruise" album from 1989. I had actually written about the album all the way back in 2012 but only for three of her ten tracks so there's plenty of stuff to choose from.

When I listened to "Cruise" the first number of times, I was somewhat uncertain about how to accept it. It certainly wasn't back to her mid-80s pop superstar days but neither was it what I considered to be her "weird" outings such as "Fushigi"（不思議...Strange）and "Crimson", although the latter album has gotten a bit more redemption in my eyes with the passage of time and the growth of my acceptance of various types of Japanese pop music in general.

"Bitter and Sweet" will always remain my very favourite Akina album but after having listened to "Cruise" again today, I'm beginning to think that this may become my second-favourite original album by her. And "Cruise" is such a different animal when compared to the pedal-to-the-metal pop feeling of "Bitter and Sweet" which had come out in 1985.

"Standing In Blue" is the song of choice for Akina's birthday today, and coincidentally, it is also the 60th article for her in "Kayo Kyoku Plus" (so a little applause here, if you please). As I mentioned in the "Crimson" article, I was still having trouble at the time letting go of Nakamori letting go of her Oricon-friendly music roots so my brain and ears weren't quite ready with her trying all sorts of things. Well, now in 2017, tracks like "Standing In Blue" are coming across loud and clear and appealing.

This particular languid song created by Show and Osny S. Melo keeps reminding me of Old Hollywood. In fact, I could imagine Akina-chan dressed up as Greta Garbo in her tux and tails sitting backwards on an old chair while crooning this. I mean, the song has an intro lasting over a minute almost as if it were intermission music to warn audience members smoking away outside to come back in since the star was about to sing. There is certainly an exotic cabaret feeling to the melody that could have come out of "Casablanca".

And when she does sing about reminiscing of old romantic times, she has that dreamy voice interspersed with perhaps some relatively quick drags on a well-worn cigarette. Of course, the ciggy would be attached to the end of a long holder. I really love my Old Hollywood. Since her "AKINA EAST LIVE INDEX-XXIII" concert video, I haven't seen any of her concert performances, but I'm pretty sure she must have performed "Standing In Blue". It lends itself well to a nice respite song between the more active numbers.

Although I realize that there is that grounding of modern instruments in "Standing In Blue", wouldn't it be quite something if Akina had performed this with just the musical instruments of the Jazz Age?
Posted by J-Canuck at 8:24 PM