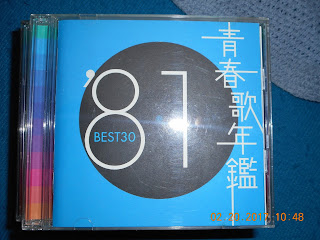 Good evening! It's the end of another weekend and I think most of us are reluctantly getting ready for another work week. Not too bad for me since my commute only takes the half-second to get out of bed and into my chair.

I'm starting my first new category in quite a while on "Kayo Kyoku Plus" and it's called The First. In this case, The First stands for The First Song or Songs That Got Me Hooked on Japanese Popular Music. And in fact, it is also a slightly whimsical project that I'm launching since I am inviting all of the collaborators who have contributed over the past five years to write about the songs that drew them into loving the raison d'etre for this blog in the first place. Furthermore, I am even inviting some of the frequent commenters over the past five years to also write about those special songs of theirs.

I've gotten in contact with a few of them already such as Karen and T-cat with positive responses. However, I would also like to hear from RagnarXIV, Laurence Green, May Lily, Francium, Kenji France, Nagaregumo, Gen Kanai, Henrique, Trevor Bordage, Yuie-Chan and Ryan Miller if they are interested as well. However, this is purely voluntary...I realize that some folks prefer to read blogs instead of writing them so I will totally understand if the answer is no. But if it's a yes, then contact me through the Contact Form on the upper-right side.

Now, when I first approached the regular contributors about the idea, one of them rightly pointed out that it would be somewhat difficult to narrow the choices down to one trigger song so in my case, I'm putting down three. And all three have been covered in the blog.


As veteran readers of KKP may already know, Japanese music has always been a part of my life since I was a baby. However, I only started getting obsessive about kayo kyoku when I made that trip to Japan in 1981 with my fellow graduates in Japanese Language School.

There were a number of songs that hit my heart as well as my ears the first time I heard them. And one was Jun Horie's（堀江淳）"Memory Glass"（メモリーグラス）from 1981 which was incidentally the topic of the very first KKP article in 2012. After the trip to Japan in July of that year, there was a quick reunion of the students and teachers at one of the students' houses in September and our host was nice enough to play a whole mess of "Best 10" shows on her VCR.

A lot of the songs stuck with me since they were getting regular rankings on that show but "Memory Glass" was one standout. At that time, I was pretty YMO-crazy so when I heard that synthesizer intro, I targeted in on the song like a heat-seeking missile. Listening to Horie, I also realized that Japanese music wasn't all enka and cute boppy aidoru tunes.


Strangely enough, Akira Terao's（寺尾聡）big hit "Ruby no Yubiwa"（ルビーの指輪）also from 1981 didn't show up to my recollection on any of those tapes playing on my classmate's video deck but I remembered hearing it through other sources. Perhaps it was through some speakers at a record store when I was walking past it in Osaka or Tokyo, or maybe it was on a commercial on TV.

However, one of the biggest and coolest City Pop hits made it onto the 1981 Kohaku Utagassen and that's where it truly imprinted itself on me. I wouldn't even know the term "City Pop" for several more years and yet there was something so appealingly urban and urbane about "Ruby no Yubiwa" but so different from anything in American urban contemporary pop at that time. It was one of the tunes that would begin the process of persuading me that there was something to Japanese pop.


Then, there is Iruka's（イルカ）"Ame no Monogatari"（雨の物語）. It actually came out in 1977 but I first heard it on a 1982 broadcast of "Sounds of Japan" which I taped. And like the above "Ruby no Yubiwa", hearing the song for the first time made me believe that Japanese popular music could be quite good and appealing. It was certainly different from enka and along with that amazing guitar intro and the wonderful rise of the strings, even listening to it on that broadcast which incessantly crackled and faded in/out didn't affect my delight and enjoyment.

Those are the three big songs for me. And thanks to them, I waited earnestly for my family to get our first VCR so that I could rent "Top 10" or "Best 10" videos, and I taped a ton of those "Sounds of Japan" shows onto cheapo Canadian Tire audiotapes. Of course, those aren't the only three to affect me, so Larry was indeed right about the difficulties in narrowing down the choices. Probably the last thing I can say here is that kayo kyoku brought me in since a good chunk of it sounded like Western music but with a certain twist to it...perhaps like an alt-universe thing. Other aspects of Japanese pop culture have formed that way.

I have already talked about the above songs in the past but I wanted to give those folks interested in our little project an example of what a sample article can look like. After all, I'm hoping that The First will now be focusing more on what other fans have to say about this shared music.
Posted by J-Canuck at 12:44 AM