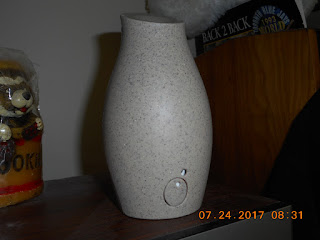 The above picture has nothing to do with the song of this article but I figure that I had to talk out the semi-angst about the contraption in the photo. It's an arty container for an air freshener operated by motion sensor that I got at the local Shopper's Drug Mart about 10 days ago. Basically if I pass by it in my room or a shadow falls upon it, it will send up a quick whiff of scent. The crazy thing is that it's the best thing to deodorize my room in years outside of opening the windows for several hours. My only pet peeve about it is that it throws up that puff with a sound that's halfway between a creak of a door in a haunted house and a mini-umpire crying "YEEEEEEEERRRRRRRR OUT!" Seriously. Depending on the time of day and my state of mind, it can unnerve me...and after I saw that photo of the creepypasta meme Jeff The Killer after midnight one night when the freshener activated...erk.


Anyways, to finish up my Sunday night going into Monday morning here, I've decided to bring in an enka song that I heard earlier today on NHK's "Nodo Jiman"（のど自慢）. I had no idea that enka legend Saburo Kitajima（北島三郎）got into all that year 2000 hoopla 17 years ago but apparently, he wrote and composed this song under his regular pen name of Joji Hara（原譲二）called "Ni-sen Nen Ondo" (2000 Swing).

My memory of going from the 20th century to the 21st century simply centered about the Y2K thing and the fears that society was going to be thrown back to the 17th century due to one computer glitch. Well, it didn't happen, and I guess for Sabu-chan, he was all for welcoming the big 2000 with open arms. And who doesn't love a big festival in Japan?

"Ni-sen Nen Ondo" doesn't seem like one of Kitajima's biggest hits and just from the title and the lyrics alone, it probably has dated itself out of regular performance although the fellow who sang it on "Nodo Jiman" didn't seem to mind. However, it's still rousing Saburo Kitajima festive fare so the fans will probably still love it for karaoke and the odd celebration.
Posted by J-Canuck at 12:14 AM