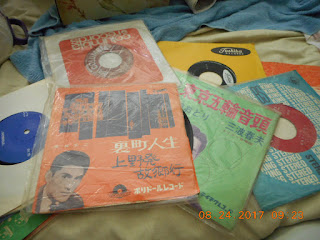 It's one of those songs that has that faint ring of familiarity and may be part of the collection but is possibly stored somewhere that I haven't checked out yet.


"Kiriko no Tango" (Tango for Kiriko) was one of four singles released in 1962 by kayo crooner Frank Nagai（フランク永井）, and although it does have that titular beat and grace to it, it doesn't really strike me as being particularly urgent as is my usual impression of tangos. It actually sounds fairly joyous. Perhaps the guy leading the dance is just over the moon with his partner and he could trip the light fantastic all night.


Tadashi Yoshida（吉田正）wrote and composed "Kiriko no Tango" for Nagai, and although there was no Oricon at the time, it must have sold well enough that the singer was able to perform it at the 1962 Kohaku Utagassen. By the way, the above video has a slightly more "modern" take on the song; perhaps it was made about a decade later.
Posted by J-Canuck at 9:47 PM