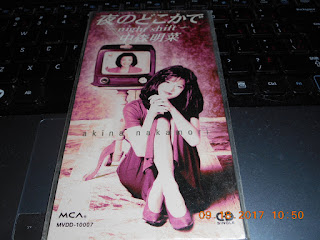 Just went through a blackout in my neighbourhood for half an hour. Nothing too bad although a number of fire engines whizzed past the condo during that time. Happily, things came back on at about 10 pm.

Anyways, years ago when I was browsing around the Shibuya branch of the old/used CD store RecoFan, I came across the CD single trays near the entrance. Now those quaint little discs in those quaint little foldable covers were starting to get pretty rare even back then but there was a whole bunch of them, each costing about 100 yen.

I saw this one by Akina Nakamori（中森明菜）which happened to be her 29th single from September 1994. Now, this was several years after its release, so my interest in the singer had waned slowly away to be replaced by interest in other artists but I was rather intrigued by that violet tone on the cover and the fact that nighttime NTV newscaster Yoshiko Sakurai（桜井よしこ）was on the telly behind Akina. Plus, I wanted to see and hear whether the song "Yoru no Doko ka de ~ night shift ~" was any good. So I plunked down my silver yen.

Well, it is dramatic and it was used as the ending theme for the late-night NTV news program "NNN Kyou no Dekigoto"（NNNきょうの出来事...NNN's Today's Happenings）which explains Sakurai's presence on the cover. But it still isn't quite my cup of tea after popping it into the player a few days ago. It doesn't quite have the pop that I used to remember when it came to her songs so perhaps if it had been a matter of arranging it a little differently, then maybe I would have liked it better.

According to an interview in the TV magazine "The Television" from the month that "Yoru no Doko ka de" was released, Nakamori, on hearing that her song was to be used as a theme song for a news broadcast, had wondered about how she ought to approach singing the tune. In the end, she decided to go for a tribute to all working women.

The single was written by Kinshi Natsuno（夏野芹子）and composed by Tsugutoshi Goto（後藤次利）. It went all the way up to No. 14 on Oricon. 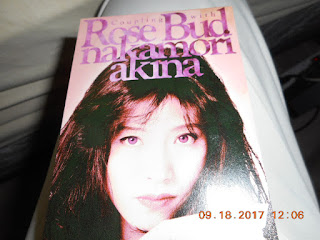