ONE III NOTES -- Shadow and Truth


For a recent anison article, I received a comment from someone recommending this theme song for an anime titled "ACCA". When I first read the title, I assumed from the short acronym all done in caps that the show must be something very ethereal or hardcore military. The original manga's full name is "ACCA Juu-san-ku Kansatsu-ka"（ACCA13区監察課...ACCA: 13-Territory Inspection Dept.）and it actually didn't fall into either category. From what I've seen of the trailer for the anime that came out during the Winter 2017 season above, it seems to be about some internecine intrigue within this massive police organization on the lines of the FBI.


Along with my original assumption of the anime, I had also thought that the theme song would similarly go along the lines of ethereal or military march. However, I was pleasantly surprised to find "Shadow and Truth" is a catchy R&B number by ONE III NOTES. I'm not sure whether this unit led by bassist Ryo Takahashi（高橋諒）and vocalist PON from ORESAMA is going to be a dedicated band or just a one-off project since it's only listed for this one song, but ONE III NOTES nicely puts its all into "Shadow and Truth". I actually had to find out from the ORESAMA J-Wiki article that PON was singing for the unit.


This has got a fun mix of rap and good old-fashioned funk and soul which reminds me more of a theme song for a 1970s/1980s gritty cop show instead of a monolithic intelligence agency. Composed by Takahashi and written by Konnie Aoki, I actually started shimmying to the music and this was pretty late in the evening when I'm usually quite ready to hit the hay. Unfortunately "ACCA" probably didn't pass muster with my anime buddy so never got to see the show but at least I'm happy to be acquainted with the cool opening theme. 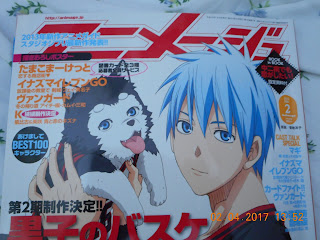 Email ThisBlogThis!Share to TwitterShare to FacebookShare to Pinterest
Labels: 2017, Anime, J-R and B, ONE III NOTES, Single