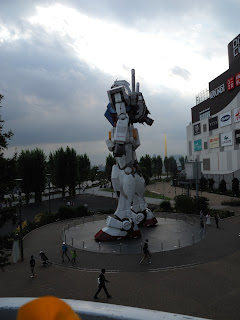 Happy Monday! Well, I'm a bit early to be presenting this since the official introduction of the now-completed Unicorn Gundam isn't for another 6 days but I will either be teaching my student or hanging out with my anime buddy on what will be Sunday September 24 so I've decided to jump the gun(dam) on this article.


Speaking of my friend, I asked him a couple of weeks ago what his favourite theme from the massive "Gundam" franchise was. It didn't take him too long to respond "Ai Senshi" performed by Daisuke Inoue（井上大輔）. Now, of course, not being a die-hard fan of the Gundam robots or their shows or their theme songs, I hadn't really seen the kanji titles for the themes. Therefore I naturally assumed that "Ai Senshi" meant "Warriors of Love" along the lines of that subtitle for the current new "Uchuusenkan Yamato"（宇宙戦艦ヤマト）series.

My friend quickly shook his head and remarked "Just the opposite". I have seen the title and I realize that the translation is actually "Soldiers of Sorrow". The song, by the way, was the theme song for the 2nd Gundam movie that came out in 1981, "Kido Senshi Gundam II"（機動戦士ガンダムII）.

"Ai Senshi" has that somewhat schizoid kayo temperament with a pretty upbeat melody by Inoue that is reminiscent of another singer-songwriter, Motoharu Sano（佐野元春）, and in a way, it kinda reminds me of a very mellow early Bruce Springsteen. However the lyrics by Rin Iogi（井荻麟） are about as depressing and anti-war as one can get, the message being that countless human lives are being thrown away in the useless pursuit of war.


After all these years, it is just now that I have discovered that Daisuke Inoue was really Tadao Inoue (井上忠夫...his real name), one of the members of the Group Sounds band Jackey Yoshikawa and His Blue Comets（ジャッキー吉川とブルー・コメッツ）. He was the one who created their most famous song, "Blue Chateau"（ブルー・シャトウ）, probably inspired by the Lake Louise Hotel in Banff, Alberta, Canada, and as I mentioned in the article for that evergreen GS classic, he was the one who whipped himself over its creation since he felt that it was to blame for the downfall of the Group Sounds genre. I also said that he was being way too hard on himself.

But I don't think he carried that albatross around his neck for long since he composed a lot of different songs since taking on his stage name of Daisuke Inoue. Of course, there were his "Gundam" contributions but he also came up with some doo-wop creations, songs for both male and female aidoru, and a jingle for the world's most famous soft drink. I figure that he should be worth a Creator article in the not-too-distant future.

Sadly, it was reported in the May 31 2000 edition of the newspaper Nikkan Sports that Inoue had committed suicide in his own home at the age of 58. 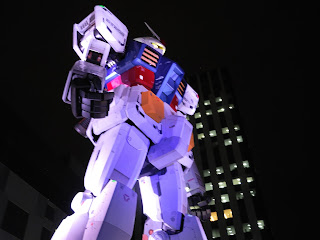