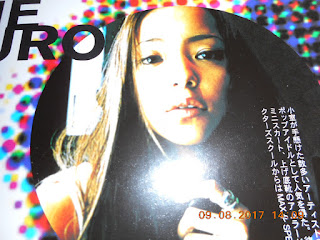 Well, I guess it won't just be Emperor Akihito who will be stepping down in the latter half of 2018. Today on her 40th birthday, Namie Amuro（安室奈美恵 ）announced on her website that she would be retiring from show business on September 16th (the anniversary of her debut) next year in both Japanese and English. I actually got the announcement on NHK's nightly news earlier this morning.


This would be the end of an era for me personally since Amuro was the first new face in music that I had seen soon after arriving in Tokyo for my second stint as a teacher in Japan back in late 1994. She was just a gangly teenager from Okinawa but not only did she strike with a force of a typhoon in the music world but also in the fashion world with her style. Not too many singers have had so much charisma that a trend would be named after her.

And even now, looking at her website, the lass doesn't seem to have aged at all even though her child is probably at the same age when she hit it big. But for me, knowing that she has been releasing singles and albums up to this year, I think the biggest highlight for her was the 1990s. She was pretty much everywhere in the media during the remainder of that decade.


"SWEET 19 BLUES" was Amuro's 7th single released in August 1996. Written and composed by Tetsuya Komuro（小室哲哉）, it wasn't my favourite song by her; my favourites are already up on the blog but it was another one of those tunes that got a lot of airplay through her appearances and commercials.


Looking at Komuro's lyrics, they seem to depict a young woman just months away from being officially considered as an adult wearily going through her life in the big city, perhaps as a hostess in some swanky club, while holding out hope that she may have met a kindred spirit so that she could escape the downtown life.

The single itself peaked at No. 2 on the Oricon weeklies while ending the year as the 64th-ranked song. It did go Platinum, selling around 650,000 copies. Amuro's 2nd album, also titled "SWEET 19 BLUES", came out a month before the single and incredibly amassed sales of nearly 2 million copies in its first week alone, according to Wikipedia, not only hitting No. 1 and becoming the 2nd-ranked album of the year, but becoming the best-selling album in Japanese music history briefly, although it has since dropped out of that Top 10 list. It still remains her most successful album.

She has announced that she will be making one final album although there was no mention about a single before her retirement. However, my question is whether she will be invited one last time to the NHK Kohaku Utagassen this year or even next year.