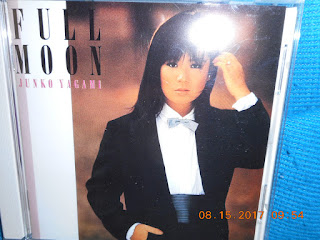 Happy weekend! I've already got a few of the tracks from this great release up but I figured it was time to cover Junko Yagami's（八神純子）7th album "Full Moon" as a whole. Released in December 1983, this is something from her discography that continued to show her City Pop side when contrasted with some of the more Latin-tinged hits from the decade before. The late Keisuke Yamakawa（山川啓介）provided the lyrics to most of the tracks with Yagami providing the melody for all of them. Ichizo Seo（瀬尾一三）did all of the arrangements.


What finally triggered me to write about "Full Moon" was frankly all of the recent YouTube attention lauded to one of the standout tracks and her 18th single "Tasogare no Bay City"（黄昏のBAY CITY）. It's become quite the Japanese Future Funk favourite, and I've read that folks who initially found out about it via its Future Funk conversion have actually started to enjoy the original even more. As I said in the original article, it doesn't seem to have any reference to any particular bay in Japan, but listen to it and then see if you don't get that urge to fly over to Tokyo Bay or Yokohama Bay.


I listened to the whole album in the last hour and have become happily re-acquainted with the rest of the tracks. "Follow Me" starts the album off nicely with some good old-fashioned 80s pop and a sweet story about two people who have probably known each other since childhood finally realizing that their relationship is about to get a romantic upgrade.


Track 4 is "Hidamari no Anata"（陽だまりのあなた...You In The Sun）. As much as a lot of folks have enjoyed her high-energy songs, Yagami still has that voice which can knock it out of the park in her ballads. And this one is short but quite sad as she sings about a girl's regrets over a one-sided love for someone who is now in the arms of someone else. It deserves that one spotlight over Yagami and her piano on a darkened stage with perhaps some tissue nearby.


The following track is "Dakishimeteageru"（抱きしめてあげる...I'll Hold You）which reminds me of all of those sappy radio-friendly ballads that I used to hear back in high school. Notably, I can't help but remember "Never Gonna Let You Go" by Sergio Mendes from the same year.


The last one I'm going to feature here for today is "Heartbreak Hotel de Choshoku wo"（ハートブレイクホテルで朝食を...Breakfast at the Heartbreak Hotel）. This is another one of those "love-done-wrong" tunes with plenty of funk as a woman is at a restaurant by herself at a seaside hotel already knowing that her soon-to-be ex-boyfriend will not show up as scheduled. At least, I hope the corn soup was good.

The title track from the album will be something I may cover in a future article on its own. I'm treating that one as a possible "grow-on-me" but after having listened to it, I think it has somewhat of a split personality problem. It starts off as if it's going to be another epic Yagami ballad but then does an abrupt gear shift into 80s disco a la Bonnie Tyler before then going spacey. A few too many "heartstopping" moments and I don't really like amusement park rides. Maybe Yagami, Yamakawa and Seo created it under a full moon.

I couldn't find out how "Full Moon" fared on the Oricon charts but it's hard for me to imagine that it didn't rank somewhere fairly high on the weekly rankings. Aside from the title track, "Full Moon" is a great album. The other songs that I have already covered along with "Tasogare no Bay City" are the sultry/hopeful "Naturally" and the Christmas tune "Cotton Snow and Paper Stars" which also has its own slightly weird tempo shifts but I've gotten used to it over the years so there is every hope for "Full Moon" the song.
Posted by J-Canuck at 4:24 PM