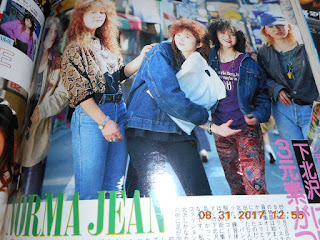 I think I was considerably lucky to have gone to Japan on my very first job after graduating university when I did. The end of the 1980s seemed to have been a time when Japanese pop music was transforming from kayo kyoku to J-Pop in a number of ways. One aspect was just the number of all-female pop/rock bands that started to appear on the airwaves. Princess Princess and Pink Sapphire were two such groups that really made their mark during my time on JET.

And then there were some other bands that I never really got to know by sound...only through seeing their name and photos in the music magazines. One example was NORMA JEAN, taken from the real name of Marilyn Monroe.


I took that picture at the very top from an old "Myojo"（明星）issue and after coming across this band several times through the pages, I decided that it was time to go back in time and see what they were all about. So I checked their history on J-Wiki. NORMA JEAN first made their appearance on the weekly late-night TBS music show "Miyake Yuji no Ikasu Band Tengoku"（三宅裕司のいかすバンド天国...Yuji Miyake's Rising Band Heaven）. I had heard of this show as this famous program which helped get bands their first big break in the style of those high school "Battle of the Bands" events. I'm just surprised that it had as short a run as it did considering its legend...less than 2 years from February 1989 to December 1990. Bands that I got to know such as BEGIN, Jitterin' Jinn and Flying Kids (that I consider to be examples of how the music was evolving) came through "Ikaten"（イカ天）.

And again NORMA JEAN was one of those bands. Looking at that photo on top, I did get the impression that it would probably resemble the aforementioned Princess Princess in sound. And listening to their debut song on "Ikaten" in August 1989, "No Pains, No Gains", yup, it had that good-time pop and rock.


With that performance on the show, NORMA JEAN won the battle, becoming the 11th Ikaten King for the week and holding that title for 4 weeks in total, just missing out on becoming a Grand Ikaten King which needs a 5-week winning streak.

The band then released the song as their official first single but under the new title of "GET A CHANCE!!". It became their first and only Top 10 hit, peaking at No. 9 on Oricon. The song was written by vocalist Dynamite Mari（ダイナマイトMARI）who had initially harboured a desire to become a pro wrestler. The melody was provided by Mikiko Mizutani（水谷幹子）, Tokie Koyama（小山時江）and Junko Kato（加藤潤子）.

As for the rest of the band, they were Kuribo（くり坊）on keyboards, Naoko 'Roger' Yamada（山田ROGER）on bass, Eri Awano（粟野ERI）on guitar and Yuuki Numakura（沼倉ユウキ）on drums. In total, NORMA JEAN released 5 singles and 2 albums before breaking up in 1994.
Posted by J-Canuck at 12:20 PM