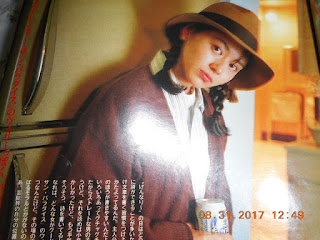 Well, I caught the first 2 episodes of "Marvel's Inhumans" tonight. Urghhhhh. I can't really say it's the "Plan 9 From Outer Space" of the Marvel label but unless things improve quickly, it's probably going to disappear without a blip. I mean, Black Bolt looks mostly constipated, and frankly seeing the Royal Family flee to Hawaii had me thinking that Five-O was gonna get involved eventually.


Anyways, onto somewhat happier business here. When it comes to the early 80s aidoru, I've ranked them in terms of A B and C. For me, the A-team has always been Seiko Matsuda（松田聖子）, Akina Nakamori（中森明菜）and Naoko Kawai（河合奈保子）with the B-team being Kyoko Koizumi,（小泉今日子） Yu Hayami（早見優）, Hidemi Ishikawa（石川秀美）and Iyo Matsumoto（松本伊代）. The C-team is everyone else. No offense to the fans for the B and C teams but that's how I always looked at the pyramid.

As such, I've been playing some catch-up with Hayami and Matsumoto for the past few years but thanks to those CDs I got last year of those two, I've been getting some more help. But for Kyon-Kyon, I have one CD single and one CD by her and they're from the 1990s. I didn't have much in the way of knowledge of her original 80s stuff as an aidoru but doing this blog for the past 5+ years has helped explain things a bit better. Still, I think I should invest in at least a BEST compilation of the lass.

In any case, I did find this interesting single, her 11th to be exact, titled "Yamato Nadeshiko Shichi Henge". That title, first of all, threw me for a bit of a loop. The first two words, yamato nadeshiko, I've known for a few years as referring to a woman showing the virtues of old-fashioned Japan. The shichi henge was something I had never heard of before. However, the one definition on jisho.org that struck me as intriguing was "kabuki dance in which the dancer quickly changes his clothes seven times".

Taking a look at the lyrics by Chinfa Kan（康珍化）and then taking that above definition into mind, my impression is that of a young woman huffily thinking that all of those goody-goody girls around her are actually dragon ladies in disguise. Perhaps she is one herself and with that definition of the kabuki dancer doing those quick changes in wardrobe, maybe she is the type that would change her personality to suit whoever was suiting her at the time. And since I've always had the impression that Kyon-Kyon was the cheeky aidoru of her day, Kan picked the right song for her.


Plus, what was also interesting about "Yamato Nadeshiko Shichi Henge" was the music by Kyohei Tsutsumi（筒美京平）. It had that rousing beat reminiscent of an adventure on either the Silk Road or the Old West or Edo Era Japan, and the thing is that it was a melody that I would have initially pinpointed as something the late Eiichi Ohtaki（大滝詠一）would have whipped up. In a way, it had that air of some of that exotic kayo that was fairly popular in the late 1970s such as Judy Ongg's（ジュディ・オング）"Miserarete"（魅せられて）and Saki Kubota's（久保田早紀）"Ihojin"（異邦人）.