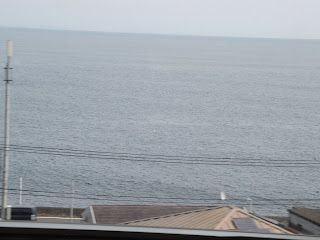 It looks like "Banana Zero Music"（バナナ♪ゼロミュージック）is coming to be one of my regular programs on the telly since it seems to have found a home in the 7:40 pm slot on Saturdays. Last night's theme was food songs and I was quite surprised to have found out that there are quite a few out there. I've also written about a few of them myself such as Akiko Yano's（矢野顕子）"Ramen Tabetai"（ラーメン食べたい）and Shibugakitai's（シブがき隊）"Sushi Kui ne!"（スシ食いねェ！）.


Apparently, a rundown of those food songs on the show revealed that the pop band Spitz（スピッツ）has had quite a few songs with food themes such as "Tamago"（たまご...Eggs）, although it hasn't gone to the level of Weird Al Yankovic.

But this time, I won't be doing a food-themed Spitz song here because I came across another very nice tune by them with a more seasonal theme called "Natsu ga Owaru" (Summer's Ending). This was a track on their 4th album "Crispy!" (which is how I like my chicken and fries) from September 1993, and I like it because it has that AOR feeling of yesteryear to it.

Vocalist Masamune Kusano（草野正宗）wrote and composed "Natsu ga Owaru", and on the J-Wiki article for the album when referring to this particular song, guitarist Tetsuya Miwa（三輪テツヤ）mentioned that it was a type of tune that hadn't been tackled up to that point by Spitz, so it was quite fresh to them. "Natsu ga Owaru" was also made the coupling song for the band's 7th single "Kimi ga Omoide ni Naru Mae ni"（君が思い出になる前に...Before You Become A Memory）which came out a month after the album.

At a concert in 2013, Kusano himself talked about the song and mentioned that although he had written the lyrics to help listeners get over a really hot summer (which is par for the course in Japan...believe me, I know), the summer of 1993 was actually unusually cold. All I can say is that listening to it, it can probably act in warming people up then.

"Crispy" itself peaked at No. 27 on the album charts and earned Gold status while "Kimi ga Omoide ni Naru Mae ni" managed to top off at No. 33.


Speaking of AOR, I'm dedicating the article to Walter Becker of Steely Dan who passed away today at the age of 67. "Peg" remains one of my melodic delights.
Posted by J-Canuck at 12:31 PM