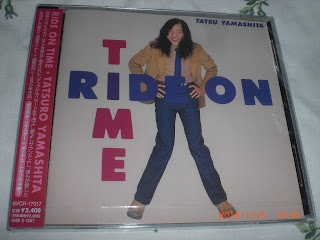 Well, Happy New Year to everyone who has already entered 2016 (and that would include Japan). Hope you enjoy the o-sechi.

As you can see above, I just had to get Tatsuro Yamashita's（山下達郎）5th album "Ride On Time" after so many years of owning mostly his BEST compilations. In fact, I just heard it in its entirety within the last hour or so. Plus that cover is one of the most recognizable in Japanese pop music with the man's cheerful knock-kneed stance.


Although the above video has the opening and closing credits of the Fuji-TV drama "Good Luck" starring Takuya Kimura, the closing does have the TV-sized version of the ending theme of Tats' iconic "Ride On Time" single. After so many years, this song still manages to put a thrill up my back, especially when that first blast of horns comes in.


"Ride On Time" was the first single by Yamashita that I had written about on the blog and the opening track on the September 1980 album, "Itsuka"（いつか）had been the latest one, so there is some sort of kismet for me to write about the two songs' originating album. In any case, Track 2 is "Daydream", another sway-worthy collaboration between Yamashita and lyricist-singer Minako Yoshida（吉田美奈子）with the former praising the latter as the greatest song that she has written for him. There is joy in this one as he raps out all of the different colors in the sky over the big city as if he were just a kid lying on the hill. It's probably the only song I know, Japanese or English, which actually used the colour carmine!


Another Yamashita-Yoshida creation is "Silent Screamer", a super-funky piece which could easily describe either a Tokyo superhero or one massively cool car careening over the highways. Even the chopper-riding punks would have to get out of the way in fear.

"My Sugar Babe" was something that Yamashita had written and composed as the bluesy theme song for his old band, Sugar Babe, back in the 1970s. But the lyrics make it sound as if it were a serenade to a lover after that wonderful evening date. The ballad also became his 7th single released in October 1980 which only got as high as No. 90. The aforementioned "Daydream" was the B-side here.

"Ride On Time" went all the way to No. 1 and eventually became the 39th-ranked album of the year, selling at least over 200,000 copies.

And for those folks who are still on the 2015 side, hope all of you enjoy your New Year's Eve! Stock up on the Advil!
Posted by J-Canuck at 3:17 PM