I've always loved Yellow Magic Orchestra. Ryuichi Sakamoto, Haruomi Hosono and Yukihiro Takahashi（坂本龍一・細野晴臣・高橋幸宏）were the guys who first showed me that there was other music in Japan other than enka and aidoru...and in such an electronically cool manner. And in a way that I can't quite put into words, YMO also helped me get into Japanese popular music in general. So no YMO, no kayo kyoku/J-Pop, no huge CD collection, no "Kayo Kyoku Plus". Messrs Sakamoto, Hosono and Takahashi would like their royalty cheques sent to...

So, their 9th single from September 1983 "Ishin Denshin" (English title: You've Got To Help Yourself) has been a bit of a mystery for yours truly ever since I first heard it on the BEST album, "YMO GO HOME!" I have alternately enjoyed it and disdained it over the years depending on my mood. Written by Hosono and Peter Barakan, and composed by Sakamoto and Takahashi, it has some of the wonderful YMO technopop flourishes along with some nice drum rolls by Takahashi, but at times, I've often considered the song to be somewhat of a lesser cousin to the band's other huge hits such as the classic "Rydeen" (yeah, I know....you came here because of "Hibike Euphonium") and "Technopolis".  It was created in tribute to 1983 being the World Communication Year by the United Nations (rather ironic for me since that included the summer I was painting fences all by myself totally isolated from human contact for a good chunk of the day for two months), but I thought the song was just a little too skewed toward a children's song about toy soldiers with Takahashi not quite hitting the notes at times.


According to the J-Wiki article on the song, Sakamoto had mentioned in an interview that the creation of "Ishin Denshin" was influenced melodically on some of the The Beatles' more cheerful tunes. With the faux horns in there, I was thinking about "Sgt. Pepper's Lonely Hearts Club Band" and the intro and outro of "All You Need Is Love". Also, according to the same article, Hosono once mused whether his lyrics, which had taken into consideration the self-help boom in the US at the time (thus the English title), were seen as being somewhat sarcastic toward charity songs.

But perhaps any potential backlash was blunted since "Ishin Denshin" peaked at No. 23 on the charts. It wasn't a flop by any means but it wasn't quite like their previous hits. The single was also a track on YMO's 8th (and final at the time) studio album, "Service" which was released in December 1983 and got as high as No. 5.

By the way, YMO's "Ishin Denshin" is a pun in terms of the kanji. The proper kanji is 以心伝心, and it means "telepathy" or "tacit understanding". The last two kanji in the song title actually means "electronic communication". Considering the state of social networking services in the world today and all of those emoji, the band may have been quite prophetic with that title. 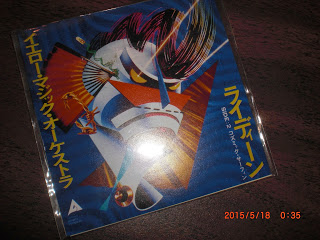