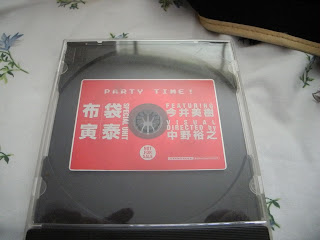 Years ago, I had seen some sort of campaign ad for Suntory on TV which starred guitarist-singer Tomoyasu Hotei（布袋寅泰）and his wife Miki Imai（今井美樹）having a bit of fun. Didn't pay a whole lot of time to it except to internally remark that that was one glam couple.

Then, some time later I was at some vending machine in Tokyo where I plunked in the coins to get a drink. There was a solid KER-PLUNK and out came the orange drink. But then as I was turning away, I heard a softer ker-plunk which had me put my hand into the bottom once more to pull out a tall white can with cool Hotei and beaming Imai on it. Inside it was the red rectangular disc that you see above at the top.


Apparently, Hotei had released a limited single via stylized DVD in 2001 only distributed through the Suntory vending machines titled "Party Time!" featuring him and his wife in a short, sweet and slightly repetitive video directed by Hiroyuki Nakano（中野裕之）. It wasn't quite a duet between husband and wife but Imai was on the "la, la, la" chorus and had a few lines in there. And I gotta say that seeing her in the video made me realize why she started out as a model.


It was an interesting gimmick and I was surprised that I could still play it on my computer DVD player although the picture was far smaller on my screen than it is on YouTube. "Party Time!" was written and composed by Hotei.

I'm just throwing the above in here but Hotei can do a pretty blistering version of "Mission: Impossible". It could deserve some air time on the next entry of the franchise but I would still prefer the original jazzy arrangement during the opening credits.
Posted by J-Canuck at 9:10 PM