Knowing how much I like the Yon'nin Shu, Mom had gotten me a copy of Hideo Murata's (村田英雄) "Kiwami Best 50" (極 ベスト50) as a surprise birthday gift, along with Mae-Kiyo's new book. Though the package (it was ordered online) arrived early last week and she gave the green light for me to open it then, I was adamant in waiting for the weekend to see for myself the contents that lie within (she didn't tell me what she got). It was hard to do so, I can tell you that, as I am not a fan of suspense and anticipation; I think I now know how dogs feel when they are given the command to wait after a treat is being placed on their snout. Well, long story short, I now have a sort-of biography of Kiyoshi Maekawa (前川清) that I can partially understand and a little over 3 hours worth of Muchi's works, both of which I'm very thankful for.

Anyway, the Murata album, that was released in mid-2015, had 3 discs in it, with the first 2 having the enka singer's original singles and the last featuring covers of ryukoka. As I read through the song list of the latter, one track in particular caught my eye. I had seen this title many a times and watched a number of enka singers tackle it on "Nippon no Uta", but for some reason I never paid attention to it despite telling myself to do so. That song is "Meigetsu Akagiyama". It was originally sung in 1939 by Taro Shoji (東海林太郎), a ryukoka veteran from Akita whose known for his trademark round glasses on his face and tailcoat on his back. Though there isn't much information on this song as there is to Shoji's earlier single that also refers to this mountain in Gunma, "Akagiyama no Komoriuta" (赤城の子守唄), judging by how often it appears on TV, it looks like "Meigetsu Akagiyama" was and is well received by the crowd.

As I listened to "Meigetsu Akagiyama" again a few days ago, its foreboding music with the haunting notes of what I think is the koto, brought to you by composer Hiroshi Kikuchi (菊地博), reminded me of another moon related song that came out almost 2 decades later, "Otsuki-San Konbanwa" (お月さん今晩は). However, in my opinion "Meigetsu Akagiyama" doesn't feel as melancholic despite sounding quite similar. For some reason I think of an assassin/ninja slinking around in the shadows rather than a homesick fellow gazing wistfully at the moon. It's probably because "Meigetsu Akagiyama" has got something to do with the ronin - Choji Yajima's (矢島寵児) lyrics do have the keywords "Sandogasa" (三度笠), which you would usually hear in songs featuring these wandering warriors.

Well, I couldn't find Muchi's rendition of "Meigetsu Akagiyama", but here's Aya Shimazu's (島津亜矢) instead. It looks like she sings it often, and she does a good job with it - the ferocity in which she growls that spoken bit is impressive. 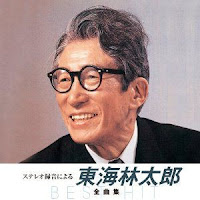