In my opinion, a number of new enka releases this year (2015) are better and more melodious than those from last year, namely Takashi Hosokawa's powerful "Kita Dake" (北岳), Hiroshi Itsuki's (五木ひろし) "Yuhi San San" (夕陽燦燦) that includes an adorable pair of felines in the MV (what's better than Itsuki with cats?) and George Yamamoto's (山本譲二) "Yozakura Aika".

I recall looking forward to hearing the enka crooner's newest single when I saw it being featured about a month or so from its release date (19th August) on his official webpage, with the single's cover having a dapper Yamamoto in The Thinker's pose. When the snippet of the MV came out, I was greeted by Keisuke Hama's very cool and manly score - dramatic strings and the electric guitar wailing which sets a melancholic tone for the song - that I fell in love with immediately. I'm not entirely able to fully interpret lyricist Kimi Takubo's (田久保真見) lyrics, but what I picture is a haggard, overworked figure hunched over his sake at the bar with a bitter and bothered expression on his face as thoughts buzz through his mind - typical enka topic. I'd say "Yozakura Aika" sounds as shibui as Yamamoto himself.


FINALLY, Yamamoto is wearing a nice suit of a solid colour and not some blazer with gaudy patterns and colours! Alright, "Yozakura Aika" is Yamamoto's 75th single and it did alright on the Oricon charts, peaking at 63rd place. I think the highest it got on the enka-yo charts was 4th, which was during the week it was released, which is very respectable; topping the list at that time was Hosokawa's "Kita Dake", just so you know. 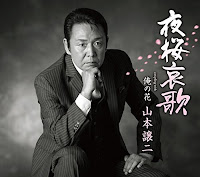 Ack, I really like this song too, but again, I want to wait till my next trip to Japan to get it. However, unlike Hosokawa's single, I'm not sure if I'm able to follow through on that....
Posted by Noelle Tham at 8:55 AM