What I present here today is a marvelous Stock Aitken Waterman rip-off, something that was not rare in Japan during the late 80s.

The first time I listened to Miki Ito’s (伊藤美紀) “Shakishaki Beach Town” I was instantly mesmerized by its cheap electronic sound in the form of Eurobeat-esque synths and a very catchy chorus. In addition, Miki Ito’s aidoru voice singing “I love you” near the end was almost too much for me to handle. I almost questioned myself why this kind of music is not considered cool nowadays.

After one or two listens, something started to bother me: “Shakishaki Beach Town” sounded like a very catchy SAW song, and I needed to remember which one. Well, it wasn’t that hard, as I quickly associated it with Rick Astley’s classic “Together Forever”, one of the most “cookie-cutter” songs that came out of SAW’s hit factory. In fact, the melody during the first lines of “Shakishaki Beach Town’s” chorus is exactly the same of Astley’s hit, and the cute keyboard twinkles repeated in the background just keeps the ongoing fun. It can’t get more sugary than that.

After this discovery, I checked some Japanese sites to see if someone commented about this little curiosity, and, of course, there was one site. It was sad, because I truly believed I had invented the wheel (not really... I was certain other people had done the same easy association in the past), but whatever. Click here for the link.

“Shakishaki Beach Town” was released in July 1988. It reached #38 on the Oricon charts, selling around 8,000 copies. Lyrics were written by Jun Tochinai (栃内淳), while music was composed by Yoshimasa Inoue (井上ヨシマサ). As for the arrangement, Ryo Yonemitsu [???] (米光亮) was the responsible. 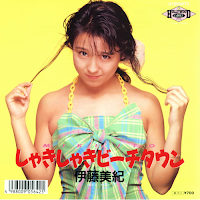