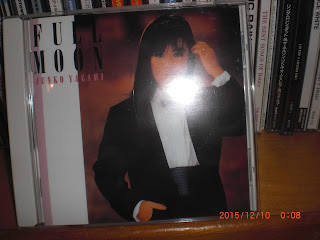 I gotta say that the above picture of Junko Yagami（八神純子）is probably the best one of her that I've seen on an album cover (sorry about the flash). And it's just one of the reasons that I got her 7th album "Full Moon" from December 1983. I noticed from her J-Wiki record that she was quite the busy singer that year since she released two earlier albums in the same year, "Lonely Girl" in February and "I Wanna Make A Hit Witchoo" in July.


As I said, that is one fine picture of her on the cover (indeed...bow ties are cool). But another reason I got "Full Moon" was for her 18th single which also became a track here, "Tasogare no Bay City" (Sunset Bay City). The single came out in November just before the album and was written and composed by Yagami with arrangement by Ichizo Seo（瀬尾一三）. It's about as City Pop as you can get, and considering that I covered her early Latin and later R&B sides of her for the last couple of Yagami articles, it was time to get back to her 80s Japanese urban contemporary facet.

"Tasogare no Bay City" doesn't specify a particular Japanese city but I always think of Yokohama when this song comes on. It's got some of that funky Japanese bass and sparkly keyboard work while the lovely singer paints this strutting image of a young lady who probably got loved and left by the usual love 'em-and-leave 'em cad in the big city. But is she in any particular pain? Not by the way Yagami sings it. It's more of a happy shrug by the heroine and back to the boyhunt. I also got that image of a hundred stories in the city with "Tasogare no Bay City", and perhaps the heroine is thinking she's in one of those tales.

The above link is an extended remix version.
Posted by J-Canuck at 10:30 PM