Have a bad day at work? Feel kicked down to the curb? Have a frothy cold mug of this song and see how you feel afterwards. "THE HERO! ~Ikareru Kobushi ni Honō wo Tsukero" (The Hero! ~Set Fire to the Furious Fist~) could work even better than a 3000-yen bottle of Yunker vitamin drink.

"THE HERO!" is also the most appropriate opening theme song for the anime "One Punch Man". I've already mentioned about the hit manga and now anime through the article on the very different ending theme by Hiroko Moriguchi（森口博子）, "Hoshi yori Saki ni Mitsukete Ageru"（星より先に見つけてあげる）. That theme may be humorously ironic but "THE HERO!" is definitely as straight-on and powerful as one of Saitama's right crosses. Right from the slow burn of the guitar in the intro right to the throat-shredding scream of JAM Project member Yoshiki Fukuyama（福山芳樹）at the very end, the power song even had me banging my head in front of the screen (not on the screen...that would be bad). Although the hero Saitama may not have the happiest attitude to his destined career, "THE HERO!" sounds like something that some of those corporate cogs would love to wake up to before trundling off to work in the wee hours of the morning.

JAM (Japan Animationsong Makers) Project has been around since 2000 and has had a shifting lineup which now includes veteran anison singer Masami Okui (奥井雅美...wow!). Their description can be had at Wikipedia, but I can mention that "THE HERO!" is their 62nd single released a couple of months ago in October, and apparently peaked at No. 19. Founding member Hironobu Kageyama（影山 ヒロノブ）wrote and composed the song. The other current members are Masaaki Endo and Hiroshi Kitadani（遠藤正明・きただにひろし）.


Although I didn't know the name of the group until "One Punch Man" was introduced to me in the last few months, it's possible that I may have come across their earlier incarnation while I was still living in the Tokyo area. I was just crossing the intersection just by Tower Records in Shibuya when a smaller version of one of those glitzy advertising trucks turned the corner while blaring a hard rock version of the famed theme for "Space Cruiser Yamato"（宇宙戦艦ヤマト）. Well, I figured...if there could be a classical take on "Uchuu Senkan Yamato", why not a headbanging one? Personally, I'm waiting for a jazz version. 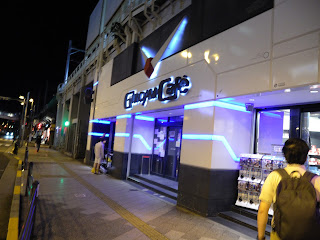 P.S. I'm gonna have to cover that "Fist of the North Star" theme pretty soon.
Posted by J-Canuck at 11:20 PM