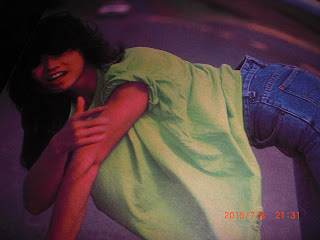 Well, here goes nothing. This is the RED Team for my Fantasy Kohaku Utagassen, split into 2 sections:


I was surprised that Pink Lady had never performed the iconic "UFO" during their heyday on the Kohaku but wouldn't it be amazing to see Mie and Kei lead off the Red Team with this one? I was planning to get even cuter with the baseball analogy and suggest "Southpaw" but, nah, had to go with "UFO".


As I've mentioned once before, Taeko Ohnuki（大貫妙子）used to be a name that fluttered in the wisps of the Japanese pop winds for years before I finally discovered her and her wonderfully quirky/ethereal music. My impression of her is that when she gives concerts, they are of the very intimate variety in an Aoyama nightclub, let's say, or some theatre in a museum since she's not really into the choreography stuff. Instead, she's very still behind the mike as she eloquently sings her ballads. "Kuro no Clair" is one of my very favourites by the singer-songwriter, and I could imagine this being performed during one of the moodier sections of the Kohaku with Ohnuki being on the dark and bare Shibuya stage with one gauzy spotlight over her.

It would be a truly fantasy Kohaku Utagassen to ever see Momoe Yamaguchi（山口百恵）on the stage again. Can you imagine if she ever decided to surprise everyone by actually showing up and performing on New Year's Eve? The bedlam in audiences in and outside of NHK Hall would be on par with watching "The Force Awakens" for "Star Wars" fans. It will never happen but in my fantasy, she'll be up there again performing the happy-go-lucky "Yume Saki Annainin".


Toko Furuuchi（古内東子）has never appeared on the NHK New Year's Eve special as far as I know but this would be the one song that I would love to see her perform on the darkened stage. "Dare Yori Suki Nanoni" would make for a fine soulful addition to the Red team performances, especially since I couldn't fit Misia in.


Yes, I know...those moans by the late Mina Aoe（青江三奈）will probably have the performance shunted to the post-10 pm time slot by the national broadcaster but heck I like "Isezakicho Blues" for some of that shitamachi-at-night atmosphere. Have a shot of that Kubota while watching Aoe slink across the stage.

Gotta have some Mood Kayo duets as well. And "Moshikashite Part 2" is one of the sparkliest with Sachiko Kobayashi and Katsuhiko Miki（小林幸子・美樹克彦）. It's guaranteed to get even grumbly Granddad moving his shoulders at the kotatsu. And even better for the set designers, Sachiko doesn't need to wear anything enormous on the stage.

Speaking of sparkly, I just had to fit in Akiko Yano（矢野顕子）and "Harusaki Kobeni" somehow while holding to that 16-members/team rule. I couldn't so I exercised that "special guest" clause that NHK has pulled for this year's actual Kohaku with the aforementioned Sachiko Kobayashi. Would love to see the lighting effects to go along with the effervescent Yano.


As much as I wanted Pink Lady to start things off on the Red Team, I needed Hibari Misora（美空ひばり）to become the final showstopper on her side. The Queen of Kayo Kyoku just has to finish things off with her epic swan song, "Kawa no Nagare no Youni" to get all viewers' and performers' throats lumping up. The lady may have terrified her contemporaries backstage just with her mere presence but she definitely enthralled them on stage.

Well, those are my 16+1 for the Red Team. I cannot be sure whether this would be a lineup that would win the Kohaku itself but it is a group that I would be happy watching on stage. Hopefully the next few days will have the White Team up depending on how busy I get with the Xmas stuff.
Posted by J-Canuck at 3:30 PM