After 23 long years - that's impressive - "Kayo Concert" has finally retired from the NHK stage as of this Tuesday, but taking its place from this April onward is the new "Uta Kon". I would think it's pretty much the same as its predecessor as it still features enka-yo as well as pop. So far the only difference is the time extension; it's going to be slightly more than an hour long. What I hope would be different, however, is that other accomplished veteran performers, like Haruo Minami (三波春夫) or Yujiro Ishihara (石原裕次郎), and other well-known showa-era songwriters, like Yoshiji Nagatsu (長津義司) or Yoshi Eguchi (江口夜詩), get to have an episode dedicated to them, similar to the Hibari Misora (美空ひばり) and Masao Koga (古賀政男) specials.


Speaking of "Kayo Concert", I'd like to talk about one of the more recent regulars on the music show, Junretsu (純烈). Now that is how you do a current-day (Mood) Kayo-Chorus group! While there is another Mood Kayo trio by the name of Hayabusa (はやぶさ), they are kinda weird and they never really stepped out of the unfortunately uncool circle the Mood Kayo groups of yore are (understandably) trapped in. Junretsu, on the other hand, take things to a whole new level - fashion-forward outfits, slick hairdos, members dancing away to the music like they are from aidoru groups or EXILE. Most importantly, they are actually cool. And what made me agreeable with them is that the lead vocalist, Yujiro Shirakawa (白川裕二郎), has a good voice for the genre he's in - smooth and fruity. It sort of helps that he's a quite a looker too.

Anyway, one of the more recent tunes that I've heard Junretsu perform besides old kayo was "Konya wa Dramatic". As its title implies, "Konya wa Dramatic" is indeed dramatic with the blaring of the trumpets accompanying a fast-paced melody with a slight Latin flair. It almost sounds aidoru if not for its somewhat Mood Kayo-like lyrics, and I could imagine someone like Hideki Saijo (西城秀樹) or Hiromi Go (郷ひろみ) tackling this song. Writing "Konya wa Dramatic" was Natsumi Watanabe (渡辺なつみ) and Meiyu Otani (大谷明裕) was in charge of the music. "Konya wa Dramatic" did respectably on the Oricon charts, peaking at 26th place and I recall it being in the top 10 on the enka-yo charts for a week or more.

Just some background information on Junretsu: They formed in 2007 at the suggestion of Kazuyoshi Sakai (酒井一圭), who's the band leader, and had their major debut in 2010 with the song "Namida no Ginza-sen" (涙の銀座線). Other members include the aforementioned Shirakawa, Ryohei Odai (小田井涼平), Yusuke Tomoi (友井雄亮), Tatsuya Hayashida (林田達也), and Shota Gogami (後上翔太). These guys are tall, with the group members' average height being 183 cm, and the tallest, Odai, stands at a staggering 188 cm! When they were in the "Kayo Concert" lineup at the beginning of the show, they usually tower over the rest.

What I thought was amusing when reading the descriptions of Sakai, Shirakawa, Odai, and Tomoi was that they all had roles as masked heroes in the Kamen Rider and Super Sentai (Power Rangers) series before their music careers. For example, Sakai was the Black Bison ranger in "Hyakujuu Sentai Gaoranger" (百獣戦隊ガオレンジャー) series, also known as "Power Rangers Wild Force", which is nice to know as I was a fan of this particular show when I was much younger - ain't nothing better than animals and Power Rangers! 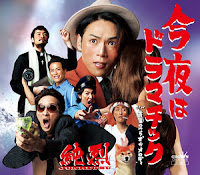 crowntokuma-shop.com/products/detail/CTM000082I
Posted by Noelle Tham at 5:41 AM