Introducing me to "Iki na Wakare" was Hiroshi Tachi (舘ひろし) through his cover album of Yujiro Ishihara's (石原裕次郎) past hits. I like this soft and comfortable tune by Tough Guy quite a bit, so I'm glad it was in the album as I don't think I would've found out about it otherwise - before I knew what the title meant, the combination of kanji and hiragana didn't make me gravitate to it.

What I like most about the B-side to Yujiro's classic "Yogiri yo Konya mo Arigato" (夜霧よ今夜も有難う) from 1967 is its music, brought to you by Kuranosuke Hamaguchi (浜口庫之助). Similar to the A-side, "Iki na Wakare" is mellow and jazzy with the occasional trumpet, and the low notes from the strings and the saxophone, except this has a Parisian feel to it. And of course the clincher is Ishihara's delicate and wistful vocals that can calm any bundle of nerves. It is very much a jazz Mood Kayo but I find that there's a very slight hint of enka in there too. Whenever I listen to the original, I get the image of a lone figure walking down a street in Paris with only his thoughts when the sun is casting an orange hue over the city and the chilly autumn breeze whipping up the dried, fallen leaves.


I recently found out what "Iki na Wakare" means: Stylish farewell. It kinda sounds rather odd, or at least to me it does, however, I'm guessing that Hamaguchi is referring to an amicable split between a couple. That allowed me to better understand his lyrics that have our main man telling his flame that they should have clean break, which made me appreciate and made my love for "Iki na Wakare" grow. My favourite lines have to be the two that kick-starts the song, and the two that wraps things up. My translations are based on what I can decipher and may not be entirely right.

Having my train of thought on this topic, it soon reminded of one of Larry's articles where the matter of how one should greet an ex was discussed in the comments, you can check it out here.

Besides Tachi, a number of other singers had done their own rendition of "Iki na Wakare", including the husky-voiced Naomi Chiaki (ちあきなおみ). Her version is rather interesting with it being faster in pace and sounding more bossa nova - very jazz bar-like. And finally, here's manly enka singer, George Yamamoto's (山本譲二) take on it which is closer to Yujiro's. 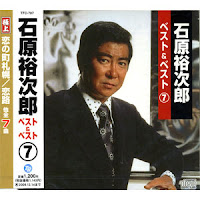