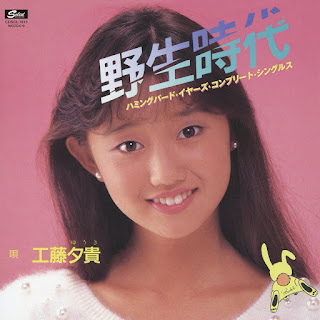 Is it possible to resist this cute cover with those sparkling eyes and childish smile? Probably not, and that’s why I didn’t hesitate and listened to what this girl, Yuki Kudo (工藤夕貴), had on her 80s catalogue. I’m still in the middle of the road (will listen to the second half tomorrow), but her debut single, “Yasei Jidai”, released in December 1984, already made a good impression on me.

A cute aidoru, indeed, but with a deeper voice than what the fluffy cover above might suggest. Also, the girl was still thirteen years old when this song was released. Very, very young for 80s aidoru’s standards.

About “Yasei Jidai”, it sounds like a proper Techno Kayo song from the early-to-mid 80s with this mixture of sci-fi synths and aidoru melodrama. Also, even though the cheap synths were reigning here, the producer found some space for strings in the arrangement, which was a nice touch.

Although not so common as the amount of mellow Seiko Matsuda-esque (松田聖子) songs out there, some aidoru singers recorded and released Techno Kayou tunes in the market. “Yasei Jidai”, for example, reminded me of Kyon Kyon’s (小泉今日子) “Meikyuu no Under Roller” (迷宮のアンドローラ), which was also released in 1984. You can hear it below.

Lyrics for "Yasei Jidai" were written by Akira Otsu (大津あきら), while music was composed by Takeshi Ike (いけたけし). As for the arrangement, Megumi Wakakusa (若草恵) was the responsible. About the lovely cover at the beginning, it's from a compilation called “Yasei Jidai Humming Bird Years Complete Singles” (野生時代 ハミング・バード・イヤーズ・コンプリート・シングルス), which was released in February 2015.
Posted by Marcos V. at 9:36 PM